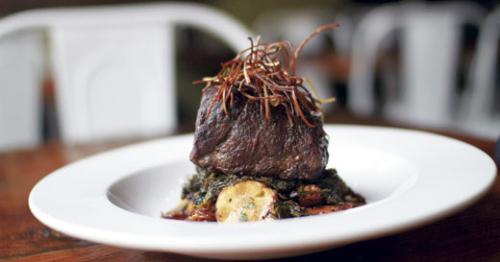 NA Exchange got a new name when it moved down the New Albany hill: Now it’s The Exchange Pub + Kitchen. It got a new look, which is actually an old look, as it makes creative use of a historic building in New Albany’s rapidly gentrifying downtown.

But it didn’t get new food, insists Chef Rick Adams, who swears that the menu he forged at the previous location — including his signature shrimp and grits — hasn’t changed a bit.You would have a hard time making some of the Exchange’s regular customers believe that, though. Adams says one gentleman in particular is adamant that the “new” shrimp and grits is much better than the “old.”

“I haven’t changed a thing,” the chef says, “but he’s sure it tastes better now.”

What’s up with that? Maybe it’s like this: When most of us first learned to eat with chopsticks, we realized Chinese food tasted much better that way.

When you enjoy a beautiful rosé with your sweetie on an al fresco terrace in Provence, the wine tastes much better than the same cheap bottle does at home on the kitchen table. And fried fish rarely tastes as good as it does at a Lenten fish fry.

In short, excellent dining isn’t just about the food: Stir in an inviting surrounding, add a touch of romance, a dash of nostalgia and a whiff of childhood comfort food, and even simple fare gets better.

I call this the Restaurant Theory of Relativity: E = MC2, or Eats equals Mood times Cooking squared. After a pleasant dinner in the attractive surroundings of the Exchange’s new quarters the other night, I can testify that the theory fully applies.

The original NA Exchange, which opened just about two years ago, was pretty much a pearl hidden in a gnarly oyster: Legitimate “gastropub” cuisine was coming out of the kitchen, particularly after Adams’ arrival last year. Its setting, though, was hardly memorable, an anonymous unit in the maze of suburban strip centers along Grant Line Road.

The new spot shares an old building with Feast BBQ, which opened last year. It was built in 1882 as the Sunny Side Saloon and Restaurant, according to the folks at Feast. Our server at the Exchange said its section was once the watering hole’s stable. Now it’s dominated by lofty walls of old red brick, a fine wooden bar with a massive bar back, and a Brobdingnagian ceiling fan 16 feet across made by Lexington’s Big Ass Fans. I am not kidding about this.

The menu is gastropubbish, a broad term that’s not so unfamiliar in these parts now that diverse eateries like Blind Pig, Village Anchor, AP Crafters, Eiderdown and Against the Grain and quite a few more have laid variable claim to it. Want to find a gastropub? Check for a trendy spot in an old building, and scan the menu for plenty of meat, in particular eclectic ethnic meats like charcuterie ($12 at the Exchange) and pork belly ($11 in a “bacon two ways” app), and you can be pretty sure you’ve found one. Add full bar service with cocktails, bourbons and a well-chosen beer list that includes plenty of local brews on tap and in bottle, and you can be pretty sure you’re there.

The Exchange Pub + Kitchen qualifies on all these counts, with a half-dozen gastropubby starters from $6.50 (for house-made beer cheese or, our appetizer pick, a thick, smoky-spicy chipotle hummus, both with thin slices of Klaus’s pretzel baguette) to $12 (for the aforementioned cured pork charcuterie).

About 10 entrees continue the theme, ranging in price from $13 (for beer-battered fish and chips) to $26 (for braised beef short ribs, a hearty winter dish we couldn’t resist). Adams’ signature shrimp and grits are $16 and feature a bold flavor mix of rock shrimp with white cheddar grits and smoked tomato chutney with a crispy fried leek garnish.

The soup of the day was red pepper bisque ($5), a thick, creamy puree with plenty of roasted pepper flavor.

The beef short ribs were just fine, a sizable block of long-cooked, falling-apart tender beef plated with a generous portion of kale and a ration of roast parsnip rounds. Meanwhile, I was smitten by the idea of an earthy wild-mushroom ragout over a creamy parmesan risotto, but wasn’t particularly in the mood for the salmon and beurre blanc that reposed atop the $18 dish, so I tested their patience by asking for a variation: a double order of the risotto, mushrooms and crisp haricots verts, hold the fish. No problem: They brought out a pretty decorated plate and knocked $5 off the price.

A quartet of cheesecake lollipops ($6) — rounds of tangy-sweet cheesecake the size of ping-pong balls, decoratively coated with heavy chocolate — made a fun finish.