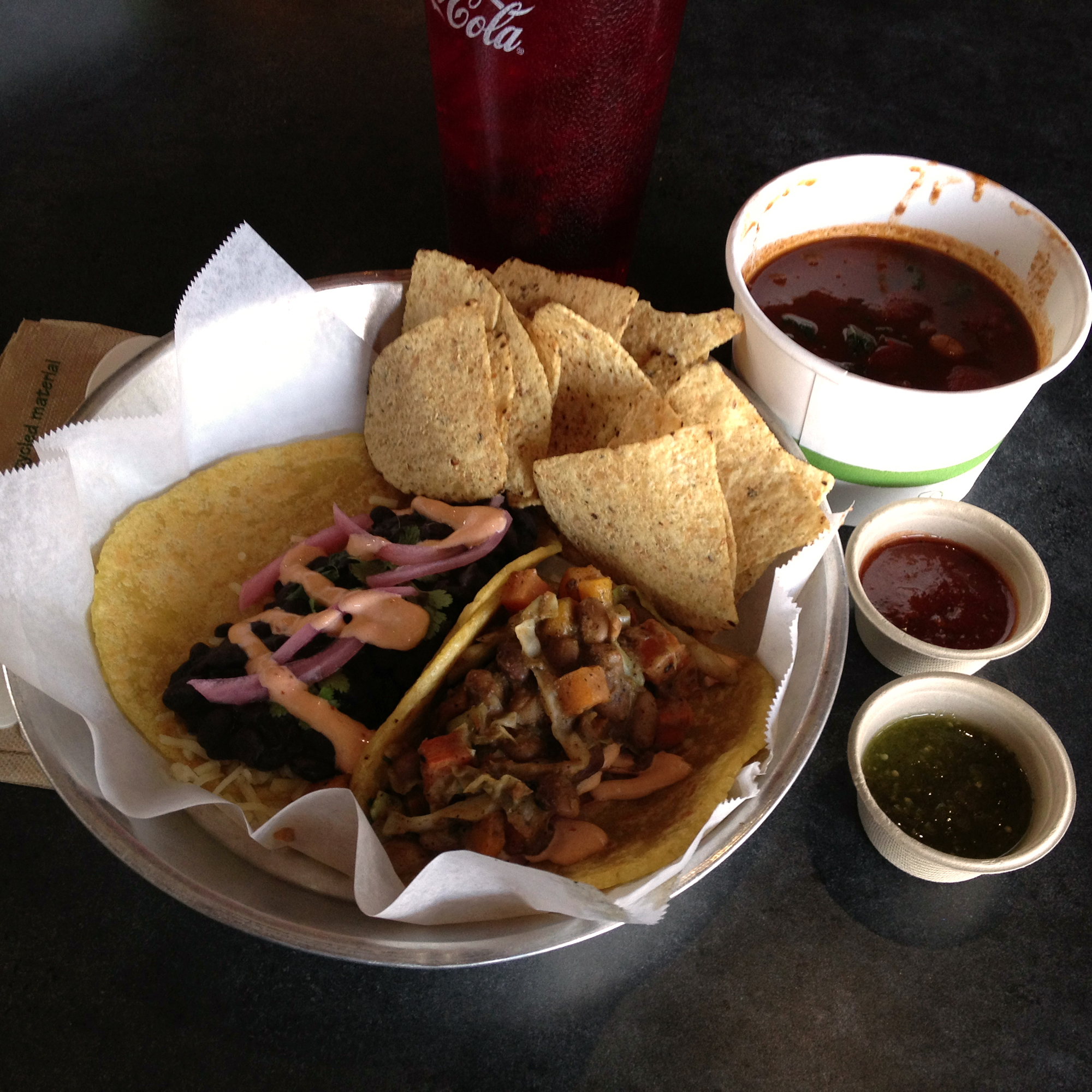 Taco Punk is just over a year old now in February 2013, and I am mighty happy to see it pass that first birthday, the make-or-break point that conventional wisdom sets as a marker of success in the restaurant business.

Some observers might have doubted that owner-chef Gabe Sowder’s amiable NuLu storefront would reach this point, as it has faced more wacky challenges in its first 12 months than I’ve seen in quite a few years on the eats beat.

Some of the early bumps in Taco Punk’s road amounted to opening jitters that bought it an early reputation for spotty service, but other hurdles were less fair, particularly a bizarre, ranting “review” that went viral after publication in the The Louisville Cardinal, the independent student newspaper of the University of Louisville.

The review zinged the Punk for, among other things, gentrifying the neighborhood and once having a pricey sports car parked out front one night. I am not making this up.

And now, more recently, Sowder has been tossed into the frying pan again, as the chattering social media classes dissect his decision to seek $20,000 through a KickStarter campaign to expand the business. To reach its goal, Taco Punk must get $20,000 by Feb. 22.

Briefly told, Taco Punk argues that its commitments to choose costly “green” service wares and locally raised meats and produce, to pay employees above average wages and to give back to its community through charitable giving all add up to a business plan that’s tough to break even. They’re seeking KickStarter funding not as charity but to increase business with an expanded catering operation and finished alfresco dining area.

Alas, Internet flames burst out as some bloggers and Facebook posters wailed in outrage, declaring this an inappropriate use of Kickstarter. But Sowder defended the move in an interview on WFPL-FM, pointing out that Kickstarter is an open platform for innovative projects, “not a charity website.”

I’m inclined to agree. Kickstarter vetted and approved the campaign, and that’s good enough for me. For the record, I don’t know Sowder, but I admire his approach – and his food! I’ve made a small Kickstarter contribution, and I keep Taco Punk on the short list of places where I’ll eat for my own pleasure even when I’m not reviewing.

In fact, the uproar prompted me to drop by for lunch last week, and I left very happy. The menu, which is no mere taqueria bill of fare but an innovative selection that reflects Sowder’s prior post as a sous chef at 610 Magnolia, offers about a dozen tacos from $3.25 to $4.50 for a single taco or $8.95 to $12.95 for a platter, which comes with two tacos, a side, chips and salsas.

Inspired to healthy goodness by the compostable greenness all around, I chose an animal-free lunch of two good-size tacos on tender, fresh-made corn tortillas: a veggie taco ($3.95) loaded with butternut squash cubes, pinto beans, tomatoes and onions in a mellow pumpkinseed mole; and a warming, earthy black-bean-and-white-cheese taco ($3.25); plus a hearty, oversize cup of the soup of the day, a rich, sweet-hot and piquant vegetarian chili. Tortilla chips were crisp and fresh.

A hearty lunch cost just over 10 bucks, there’s no tipping, and the cashier told me about an even better deal: On Meatless Monday every week, the same healthy platter is $2 off.