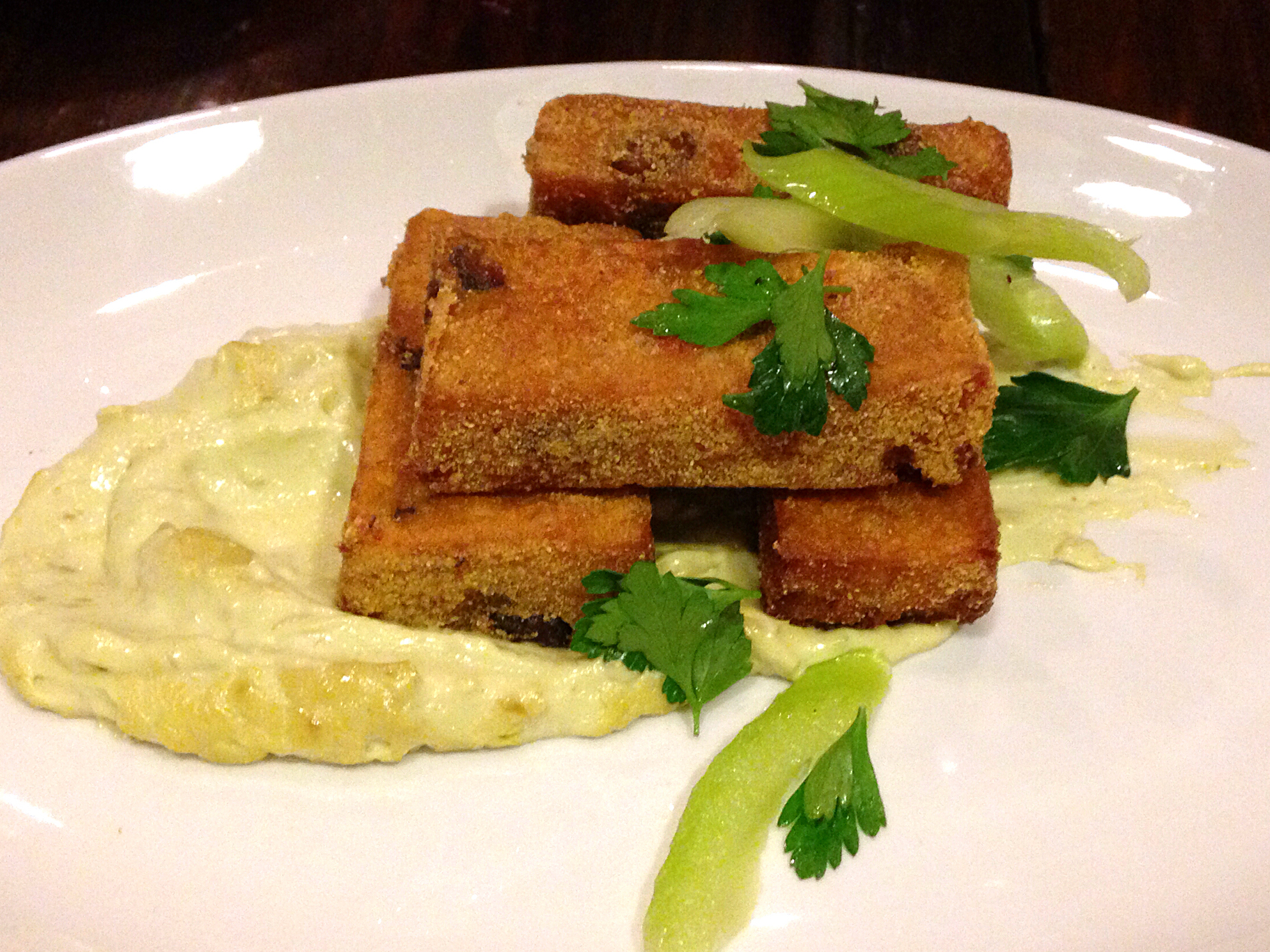 How good is Exchange Pub + Kitchen? Why, it’s a Pillar of its community.

I mean that literally: This month the popular spot in New Albany’s buzzing downtown dining scene won one of the city’s Pillar Awards, which recognize contributors to downtown restoration and renovation. Exchange Pub won the Horizon Award, honoring co-owners Ian and Nikki Hall for their 2012 move from the Grant Line Road area into the historic 1875-era Shrader Stables building downtown, the New Albany Tribune reported.

Steve and Donna Resch, the developers who restored Shrader Stables for the eatery’s use, won the 2013 Renaissance Award. The local newspaper cited “the restoration of the building’s mezzanine, the reuse of salvaged lumber for dining tables and the replica use of the old Shrader Stables’ signage for The Exchange’s storefront” among highlights.

Okay fine, applause and all that. But how’s the restaurant? Let’s put it this way: I’d rate it in the region’s top tier of gastro-pubbish eateries. It would be a standout whether it’s in New Albany, NuLu, Frankfort Avenue or Bardstown Road.

Even for timid Louisvillians wary about crossing the Mighty Ohio without a passport, Exchange Pub is easy to find: Take I-64 west across the Sherman Minton Bridge, get off at the first New Albany exit; take right turns onto State Street, then Main. Look for a sturdy, historic-looking two-story brick building on your right.

Chef Robert Temple’s relatively brief menu focuses its attention on just eight main dishes, ranging in price from $14 (for very fine fish and chips, fresh, crisp and grease-free) to $30 (for a 10-ounce dry-aged prime strip steak with bacon, mashed potatoes and creamed spinach). There’s plenty more choice, though, among 10 small plates ($7 to $12) – fine for grazing or assembling a large meal out of small parts – a trio of sandwiches and a half-dozen salads, plus some sides that break right out of the box, like curry lentils and cauliflower or sweet potato mash.

The full beverage program is appealing, too, with cocktails, 30 bourbons, a dozen craft beers each on tap and bottle, representing a good mix of local, national and world beers. The thoughful wine list includes offbeat, affordable items.

We went with a pint of Boulevard unfiltered wheat beer ($5) and a bottled Paulaner Lager ($5), and settled in to feast on small plates.

Polenta fritters ($8) give new meaning to the words “crispy bar snack.” A half-dozen rectangular strips of polenta with black beans, fried golden-brown and crisp, were stacked like old-fashioned Lincoln Logs atop a rich avocado aioli and a garnish of thin avocado slices and Italian parsley.

Steamed mussels a la Nage ($11) were perfect and could save New Albanians a trip over to Mussel & Burger Bar. Two dozen beauties swam in a subtle, mustard-scented white-wine broth, with a length of pretzel baguette alongside.

Belgian-style pommes frites ($6), served in a tiny fryer basket, were sizzling and crisp, seductively dotted with Parmesan, garlic and chives.

Small plates they may be, but they added up to a filling dinner for two. The $47.08 tab (plus a $10 tip), wouldn’t be easy to match for value in Louisville’s trendy dining districts.