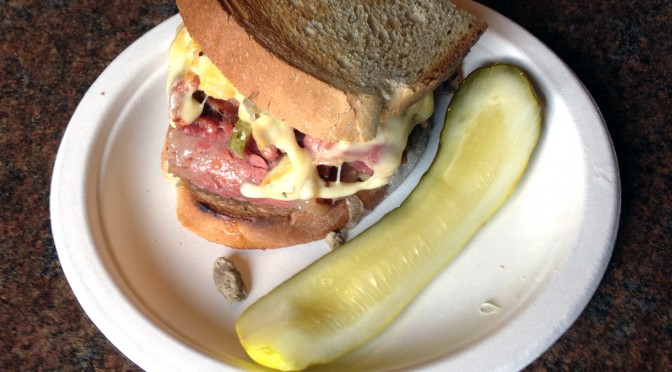 Mary took a bite of her sandwich – no easy task considering its oversize girth. She chewed gently, looked thoughtful, then firmly opined: “This is almost too much meat.”

Yes, this is one of those things that no one said, ever … until someone said it.

And it betrayed a basic failure to comprehend the simple reality of delicatessen tradition: “Too much meat,” meaning “generously, gloriously piled high,” is just what delis do.

We can’t blame her for this. For whatever reason, authentic deli in the New York style has never really taken hold in Louisville. Asked to point out the nearest example, wits on the LouisvilleHotBytes forum typically wink and point to Shapiro’s in Indianapolis, roughly 110 miles north.

But I might argue that Louisville’s top deli spot is hiding in plain sight, right here on Bardstown Road. Yep, I’m talking about Stevens & Stevens, offering the real deal in the Highlands space that it shares with Ditto’s Grill.

As its eponymous owners Mark and Susan Stevens point out on the deli’s web site, when Dominic Serratore and Frank Yang were planning Dittos back in 1990, they invited the Stevenses – both classically trained chefs who had worked with them at the old Casa Grisanti – to build a deli in the back of the shop.

They jumped right in, and after a few trips to Gotham to study deli culture, sought to build a new place that would respect the best of old-school Jewish deli culture while staying true to Kentucky-style tastes and “keeping up with the new trends of healthy eating and variety that our Highlands neighborhood needed.” It opened on April Fool’s Day 1991, garnered quick critical praise, and it’s been Louisville’s go-to deli ever since.

Now, take it from a one-time Kentuckian-in-happy-exile New Yorker: this deli pays homage to the classic NYC deli experience, but it is by no means strict kosher. A variety of ham sandwiches on the menu rules that out, along with mixed meat and dairy. You can find just about anything you like, though, on the massive deli-style menu that fills a wall with deli goodness, with many of the dishes named after celebrities like The Woody Allen (pastrami brisket on rye, $7.25), and the Henny Youngman (hot corned beef, $7.25). I can’t recall a thing on the menu over $9.

We sought the extremes of deli goodness, starting with the meatful Phantom of the Opera ($6.50 for a half-sandwich and cuppa soup combo), featuring generous, if thick-sliced by deli-standards, rations of corned beef and pastrami, topped with a schmear of house-made chopped liver, slaw and swiss. As participant in the Mayor’s Healthy Hometown Movement, Stevens & Stevens rather gleefully informed us that this sandwich contains 639 calories. We probably needed to know that. but we didn’t particularly want to. Chicken soup was okay but a bit bland, not up to the sandwiches.

Then we balanced out the meat extravaganza with a healthy, all-veggie Mid-City Underground ($4.95 cheap), a piled-high mix of flavors and textures: crisp cucumbers and carrot shreds, tender lettuce and sprouts, cream cheese and swiss and rather wan-for-the-season tomato slices on multigrain. To my horror, this healthy goodie clocks in at 540 calories, one more than the meat-eater’s delight. How did that happen?

Soup and sandwiches and a bottomless supply of clear, strong iced tea came to a bargain $14.52.