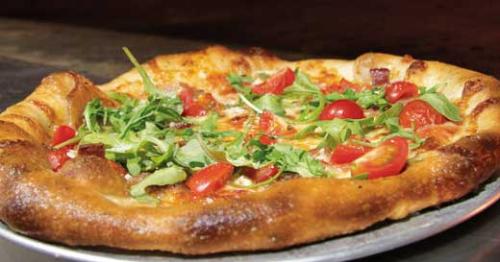 With all the justified uproar these days about mountaintop removal, miner safety and other issues surrounding Kentucky’s beleaguered coal industry, it may seem a bit odd to have something nice to say about coal.

But damn! A coal-burning oven makes one fine pizza. What’s more, the good folks at Coals Artisan Pizza, recently arrived in the Vogue Center, are burning re-mined hard anthracite coal, which is about as environmentally friendly as coal can be.

But how are the pies? Easy: This is seriously good pizza, folks. We’ll talk about that in just a moment, but first, a little background on this coal-burning thing.

There are essentially three ways to cook pizza in a commercial setting: local utility power (gas or electric), wood or coal.

Pizza ovens heated by gas or electric are by far the most common, even in such havens of traditional pizza as New York City.

Wood-burning ovens, which hail from Naples, Italy, have become popular in the United States. The fierce heat of a wood fire does delicious things to pizza dough thanks to the twin effects of fast “oven spring” rising and the tasty caramelization that occurs when intense heat toasts the crust.

Coal-fired pizza ovens are much less common, but coal is making inroads into artisanal pizzerias around the country, spreading from its roots in New York City, where bakers immigrating through Ellis Island found coal much more readily available than wood, and where iconic pizzerias like John’s in Greenwich Village and Totonno in Brooklyn burn coal to this day.

The proof, of course, is in the tasting, and after repeated taste tests, I’m prepared to rank Coals among Louisville’s best, on par with the product of the gas ovens at Papalino’s (which run at 450 to 600, for what it’s worth, teaching us that heat is something, but it isn’t everything).

If you’re adventurous, ask for Coals’ pizza of the week, which may be something as wacky as Thai chicken pizza with authentic curry sauce. Want a calzone? Stand by, they’re coming soon. Like the crust this week? It may be even better next week, as the team experiments relentlessly, trying a variety of hard-wheat, high-protein flours and tweaking their wet-dough, cold-rise techniques. The results show in the bubbly and crisp, yet light, crust. Nobody will be leaving the “bones” of this pizza on their plate: It’s too good to waste.

Nor does the quest for perfection stop with the dough. Toppings are chosen with care. Produce is sourced from Creation Gardens. Meats are hormone-free and humanely produced on local farms, with beef from Stan and Lelia Gentle’s DreamCatcher Farm in Spencer County.

Even the classy venue bespeaks something more than mere “pizzeria.” Exposed brick on the back of the old theater is braced by sturdy oak pillars and beams. Banquettes look like gold moiré silk; tables are heavy black wood with sturdy, comfortable side chairs. An attractive bar lines one side of the room, and the open kitchen window frames the open door of the coal oven and its roaring fire.

A half-dozen pizzas bear the names of Louisville neighborhoods: The Brownsboro sports pepperoni, cheeses and marinara sauce; a Clifton brings you Italian sausage, onions and cheese, with a ration of roasted piquillo peppers on top. They’re $12 to $14 for a pie in the evening, $7 or $7.50 for a smaller round at lunch, available in combos with soup, salad or a sandwich.

Soups have been spectacular — we sampled a rich hot brown soup, all the classic ingredients deconstructed in a bowl, and a comforting Italian tomato-basil. The arancini ($7), a fried ball of pancetta-studded risotto stuffed with cheese and sun-dried tomato marinara, has won raves. It’s available evenings. I need to go back and get one soon. Maybe two.

Short but well-chosen wine and beer lists mostly avoid the usual suspects in favor of beverages of real interest that are fairly priced. There’s a short selection of name-brand bourbons and other tasty libations as well.

We’ve tried most of the pizzas and found them so good that it’s been hard to move on to other goodies. The St. Matthews ($12) was a classic Margherita, its wonderful coal-fired crust lightly topped with sun-dried-tomato marinara, silken fior di latte mozzarella and fresh basil. The Highlands ($13.50) puts crisp DreamCatcher bacon, cherry tomatoes and fresh arugula atop a mixed-cheese pie. The Bardstown ($8 in a lunch combo) is a vegetarian’s delight, a white mixed-cheese pie topped with wild mushrooms, caramelized onions and roasted cloves of garlic. The Caesar half of the combo was outstanding, dressed with crisply fried fresh anchovies and croutons that must have come from the coal oven.

The Coal Oven burger ($7 at lunch) is a small but tasty treat, a good-sized round of ground DreamCatcher beef dressed with sun-dried-tomato aioli, perched on a house-made bun. It was delicious and juicy, although let’s face it: You’re not going to get a rare burger out of a 1,000-degree oven. Never mind, it was good anyway. The Coal Oven wings ($8) were more refined than your average sauce-drenched Buffalo wings, saucy and herbal, topped with piquant piquillo peppers.

Tiramisu ($5.50) was outstanding — a creamy, delicate filling in a crisp, bittersweet chocolate shell.

We got out from lunch for a reasonable $15.90 plus tip. An evening takeout load big enough to feed eight was $36.57 plus tip.