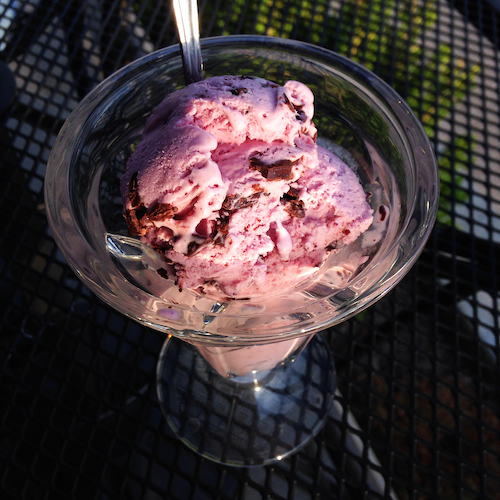 “I scream, you scream, we all scream for ice cream.” Once a popular ditty of the “Roaring Twenties,” this folk wisdom has grown into a simple truth.

Who doesn’t like ice cream? As Mary’s father used to say, even after an ample meal, “There is always room for ice cream.” And with Spring belatedly breaking after one of the most relentless Winters in recent memory, the signs of the season include, in addition to green buds, bright flowers and insane allergy-pollen levels, long lines of hungry supplicants forming around just about every ice-cream shop in town. Even the perennial ice cream trucks have brought their clangy rendition of “Camptown Races” back to the streets of our fair city.

I know that some folks nostalgically favor soft-serve ice cream at a half-dozen iconic old neighborhood ice cream spots around town. The Cincinnati ice cream empire and the ice-cream-and-pie folks also have fans.

But none of those options could fill the ice cream-shaped hole in my heart after Ehrmann’s bakery closed years ago … until Tim and Roy Koons-McGee brought us the Comfy Cow.

Coming up on the fifth anniversary of its original shop in Westport Village and marking 2 1/2 years’ residency in the new facilities that replaced the former Superfund site at Genny’s Diner, Comfy Cow has cemented its place as the metro’s number-one source for high-quality ice cream. It earns that place through a firm commitment to quality ingredients without cutting corners.

And now the Cow’s herd is growing. Its third location opened in the University of Louisville’s Cardinal Towne center. Another Cow will soon replace the Heine Bros. Coffee shop at Bardstown Road and Eastern Parkway. The May 1 grand opening will feature festivities including musical entertainment by Ben Sollee from 7-9 p.m.

They’re also crossing the Ohio with a New Albany shop, their first franchised store, opening May 10, operated by the good folks from New Albany’s outstanding Exchange Pub and Kitchen. Another shop is coming in a new shopping center near the Gene Snyder at Shelbyville Road. And farther afield, Tim Koons-McGee says they hope to add as many as three franchised stores next year in Nashville, Tenn.

The Comfy Cow became so popular so fast that within two years of its opening, it had already caught the attention of Travel Channel’s “Man v. Food,” which included its 15-scoop Comfy Cow Challenge Sundae along with such Louisville culinary landmarks as Derby Pie, The Brown Hotel’s Hot Brown, and the now defunct Lynn’s Paradise Cafe.

Ice cream pies and pops, cups and cones in many shapes and sizes offer variety, but we’re generally good with a pair of kiddie-size cups which will get you out of there for around five bucks plus tip.