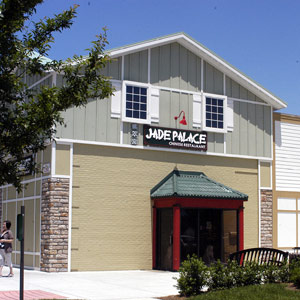 Centuries ago, long before “small plates” became trendy and before the Spanish came up with the idea of placing a little dish with a snack on top of their Sherry glasses to keep the fruit flies out of their wine, the Chinese realized that a procession of small plates bearing bite-sized snacks would be a civilized way to while away a convivial meal.

This tasty treat, called “dim sum,” which is Cantonese for “touch the heart,” has become a Chinese tradition, the Saturday or Sunday equivalent of weekend brunch. Diners may choose among dozens of bite-sized snacks in an artful contrasting array of hot, cold, savory and sweet. Many items are steamed; others are deep-fried, and a few come in more unusual presentations, rolled in glistening Chinese wheat pasta or wrapped in a dark, sturdy lotus leaf.

The dim sum crave has spread around the world, and just about every city around the world now boasts a place or two where dim sum may be enjoyed. In Louisville, that place is Jade Palace, an East End eatery that has featured these goodies for 20 years or so. A few years ago, they kicked things up a notch, adding a squadron of rolling carts that servers push along the long rows of tables, offering diners the option to point out and choose their favorite dim sum delights. Now Jade Palace boasts a spiffy new exterior – it’s part of the renovated Westport Village shopping center – but the dim sum stayed the same.

You may order dim sum from a menu if you don’t want to wait for the carts, and a regular Chinese menu is always available; but we love the dim sum carts, and so, it appears, does most of Louisville’s Chinese community and quite a few hungry Westerners as well.

The concept is simple. Sit down, order your drinks (hot black tea is traditional) and wait for the carts to start rolling by. Point to your favorites, and eat as much as you like. The servers mark each dish on your bill – they come at standard prices depending on size: $2.50 for a small dish, $3.99 for medium, $4.99 for large and $5.99 for extra large.

Here’s a quick guide to some of our dim sum favorites. Most come in two to four bite-sized items per serving, which makes sharing easy:

Char Sui Bao are soft white wheat rolls, differing from their Western cousins in that they are steamed, not baked, wrapped around a hidden treasure of tender Chinese barbecued pork.

One of our favorites, Cheung Fun, rarely comes on the carts but may be ordered: They’re slippery-tender broad rice noodles rolled around steamed shrimp, pork or beef and served on a plate doused in a light, sweet soy sauce.

Fill your vegetarian craving with a plate of Gai Lan, a Chinese variant on broccoli that’s mostly tender stems and thin leaves, no florets. It comes with a bowl of thick, sweet hoisin sauce for dipping.

If you’re looking for something more substantial, the dim sum menu offers good-sized noodle bowls, some stir-fried dishes, crispy duck, and another of our favorites, congee, which is a comforting savory rice porridge cooked with chicken, shrimp, mushrooms or other ingredients.

This sampler only hits a few highlights of Jade Palace’s extensive dim sum menu, which features 60 or more selections, including such familiar items as crispy egg rolls and such challenging tidbits as chicken feet.

Dim sum is not only a tasty brunch but an affordable one. Even if we eat until we’re stuffed, it’s hard to push brunch for two past $30 or so, plus tip.