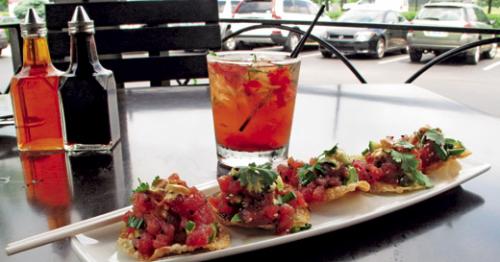 After all, back in those days when the Beatles and the Stones and Dylan were new, so was Chinese food. Well, not to the Chinese, who’ve been eating it for millennia, but certainly to folks in Louisville who were suspicious. Dishes with odd names like “war sue gai” and “egg foo yung” didn’t sound like anything a normal person would eat. “Moo goo gai pan?” Really?

But even if our parents were scared to taste it — or maybe because they were — Baby Boomers soon gave Chinese a try, and we loved it, mostly.

Eventually spicy regional Chinese like Sichuan and Hunan emerged on the scene, and we began to recognize the old-style “Chinese” dishes as Chinese-American hybrids made to satisfy the bland-tuned taste buds of our forbears.

Some of us were skeptical now. Fool me once, etc. Was “Sichuan” really Sichuan, or just more Americanized Cantonese with hot sauce added? Why did Chinese people have their own menu at our favorite spots, and why did their food look so different from what we were being served?

If we asked for the “real Chinese” menu, Chinese restaurateurs would insist that we just wouldn’t like it. And maybe we wouldn’t. Sea cucumber and fish maw and pork intestine are, after all, acquired tastes.

Eventually, though, a few favorite spots — most of them new, plus the venerable Oriental House — realized that some American foodies actually would like it. They offered “authentic” menus in English, and they earned our love. These are the Chinese places I favor now, including Jasmine and Peking City Bistro and … well, you tell me your favorite and I’ll eagerly check it out.

So, then, why in the hell am I reviewing PF Chang’s, a national corporate chain owned by Westerners and widely scorned by food geeks? Well, it all started with my sister, Amy, who was visiting from out of town. She likes good food and will gladly join me on an adventurous food expedition. But OK, she likes PF Chang’s, too.

When I realized that the Louisville Chang’s has been going strong for almost eight years now, I couldn’t help wondering if it was still drawing a three-hour-wait crowd as it did after it opened here in 2005. Reviewing the new arrival then, I declared it, “… well designed, staffed with competent people and serving food that ranks well above the median for corporate chain fare. Still … three hours? Give me a break!”

I’m relieved to report that, although the parking lot looked mighty full on a Saturday, we got a good table with no waiting. And as for the food: Well, “well above the median for corporate chain fare” still describes it pretty well. As it turned out, very good appetizers set a high note that the rest of the meal couldn’t reach.

Lettuce wraps ($8.95 for chicken or tofu) consisted of a warm, spicy mix of finely chopped protein, mushroom and onion atop crunchy rice noodles, with crisp iceberg lettuce “scoops” to wrap around the filling and devour. Ahi crisps ($9.95) looked like Chinese seviche, a row of artfully arranged rounds of fried wonton topped with rare, beefy ahi tuna and diced cucumbers, avocado and onions brought together with a tangy citrus-soy sauce.

The three of us gave these apps six thumbs up, but little else got those digits rising again.

Egg drop soup ($3.50 for a cup) set off warning bells. “It doesn’t have much flavor,” Mary said, “but the flavor it does have is bad. It reminds me of dishwater.”

Among the mains, the menu billed Ma Po tofu ($8.95) as “crispy.” I’d have called it “chewy.” Its spicy ginger marinade appealed, but the ring of broccoli florets around it were barely edible, barely cooked but flabby, not crisp.

Similar flabby-not-crispy tofu showed up in the coconut curry ($8.95), but to its credit, toothsome stir-fried veggies and peanuts joined the lackluster tofu in an addictive coconut milk-curry sauce. The almond and cashew chicken ($12.95) resembled old-time Chinese-American fare with less soul; and a trio of three large-bite-size desserts was decadent in calorie count, at least.

Main dishes at Chang’s run from $7.95 to $24.95, which isn’t quite high-end dining; but it’s certainly not as cheap as chopsticks Chinese: The share of a midday main meal for two came to a bit more than $40, plus a 20 percent tip for attentive, professional service.