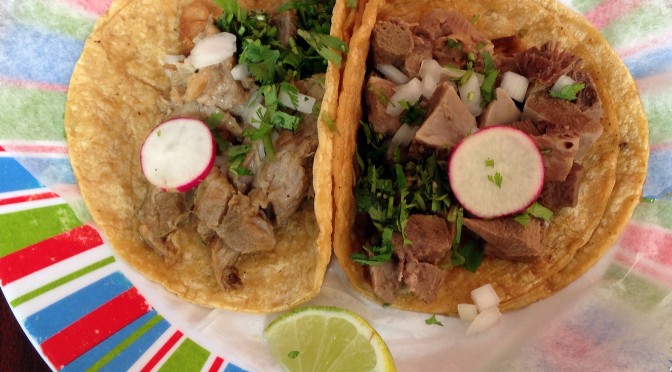 Menudo, the fabulously strong flavored and fiery Mexican stew made from pork chitlins (“chitterlings,” to the prissy, or, if you insist on a definition in English, pork intestines) is one of the world’s most trusted hangover cures.

This may relate to the truth that, no matter how bad you feel, if you can hold down a stenchy ration of menudo, you can probably hold down just about anything.

Be that as it may, taquerias traditionally offer menudo as a cheap special on Saturday mornings, ready and waiting as a healthy antidote for the morning after the night before.

If you’re really craving Mexican chitlins after reading all this, though, you don’t have to wait for Saturday. You can head on over to El Mariachi in the East End or El Molcajete in the South End right now and summon a brace of Mexican-style tacos de tripas – yep, chitlins tacos – for around 2 bucks a taco.

In fact, if you’re feeling just offal, El Molcajete in particular offers an unusual collection of organ-meat tacos. At $2 per, you can go for the aforementioned tripa; or lengua (beef tongue), buche (beef stomach) or even cesos (brains). No extra charge for three colors of spicy salsitas in hefty squeeze bottles.

So, you’re probably asking, how does all that stuff taste? Well. Um. Okay, we had a couple lengua tacos. If one of you guys wants to try brains or any of those other innards, send me an Email and tell me about it. For us, having sampled one food item that came out of an animal’s mouth, we decided to play it safe and finish up with some eggs. Er, huevos.

Still, scary food to the contrary notwithstanding, we enjoyed good Mexican food and a friendly welcome at the two “real” taquerias that ranked highest in a recent LouisvilleHotBytes forum discussions about the city’s best. And to set up a fair comparison, we steered clear of the familiar burritos, tostadas, fajitas and such, going with a couple Mexican tacos and egg dishes at each.

Specifically, we went for huevos rancheros and a lengua (tongue) taco at El Mariachi, which is in the East End suburbs, in the little strip of Latino stores on La Grange Road just west of Hurstbourne between Lyndon and Anchorage, across from the UPS office building.

Another day we chowed down on huevos divorciados and lengua tacos at El Molcajete, which resides in a storefront at Fourth and Heywood, one block from Churchill Downs. (It’s not to be confused with Santa Fe Grill, another popular taqueria, which is at Third and Heywood.)

Both shops are small, colorful, and usually packed with a mostly Latino audience, but despite being obvious Gringos with very limited Spanglish, we felt warmly welcome at both places and met little language barrier that couldn’t be resolved with a smile.

Both menus are affordable, with tacos starting at $2 or less, and few items over 10 bucks. Both offer adult beverages as well as Jarritos Mexican fruit-flavored soft drinks and Mexican Cokes made with real cane sugar, as good as ours used to be before the days of high-fructose corn syrup.

Starting right in with chips and salsa, El Mariachi boasts house-made maiz (corn) tortillas, thick and crisp with an al-dente bite and intense corn flavor. They’re frankly a bit greasy, but it’s good grease, and it’s hard not to eat them all, with mild and hot red and fiery pale-green salsas. El Molcajete’s chips appear commercial, but they’re fresh and crisp, and the unusual brownish salsa here is a keeper, warm and piquant, with haunting scents of fruity fresh chiles and smoke.

We ordered a lengua taco at each place and, to be honest, found them okay, but not good enough to make us slap our chaps and yell “Yeehaw!” Both were served Mexican-style with cilantro and onions. El Mariachi’s bore a scanty portion of chopped beef tongue so mild that it might have been deli beef. El Molcajete’s lengua was more generously portioned, but it, too, was light on flavor and soft. A small shrimp-and-tilapia ceviche on a corn tostada ($3.35) won more applause.

Over at El Molcajete, huevos divorciados ($6.50) hit the spot. Suiting the tongue-in-cheek moniker, two over-easy eggs glared angrily at each other from beneath competing spicy green and red salsas. The rice was fine, and frijoles exceptional, a nice blend of smooth bean puree and a few bean chunks to give it texture.

With Mexican soft drinks, we loaded up on a lot of food at El Mariachi for a toll of $28.56 for three, and smiling and attentive service garnered a $6 tip. A quick lunch for two at El Molcajete came to a bargain $13.50, with a $4 tip for patient and mostly bilingual service.