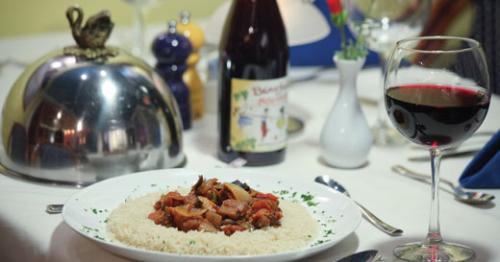 All right, boys and girls, it’s time for our French lesson!

Very good! Now, let’s learn two important food words. Repeat after me: “Cassoulet.” Draw it out, warm and rich, just like the hearty dish itself, “Cahs-soo-lay.”

Good! Now take care, this next word doesn’t sound quite like it looks: “Ratatouille.” Someone bought it too many consonants. Drop a few to get “Rat-ah-TWEE,” and wait eagerly for it to come to the table.

Got ’em? Now take your new words to a good French restaurant for a memorable dining experience. I suggest giving them a try at Louis Le Français, a fine, friendly French restaurant with a warm accent of France’s Mediterranean South. Opened in 2012, it has become a landmark in downtown New Albany’s growing restaurant cluster.

Even with the arrival of such fetching French eateries as La Coop and Brasserie Provence on the Louisville side of the Ohio (not to mention the landmark Le Relais), Louis Le Français is well worth the short trip to New Albany.

Restaurateur Louis Retailleau, who hails from the French Southwest and whose restaurant name literally means “Louie the Frenchman,” had previously hoped to open a French eatery in the Metro, but backed away from locations in St. Matthews and the Hurstbourne area before ending up in the Hoosier suburb.

But this was a good move, it seems, as every time I visit this charming New Albany eatery, I find it crowded with seemingly happy diners enjoying good French food, appetizing libations and friendly service.

The authentic French clearly begins at the kitchen door. Everything I’ve sampled here has been well-made in the tradition of France, specifically its southern climes, Provence and Languedoc.

The other night, visiting with our friends Bob and Sharon, we enjoyed American cocktails (a fine manhattan made with High West Double Rye for $10.50, and a fluorescent green, amaretto-scented seasonal potion called Emerald Ice, $6), followed by a geographically appropriate bottle of a dry, food-friendly Rhone valley red wine, E. Guigal 2010 Cotes-du-Rhone ($37).

We kicked up the warmth another notch with delicious baguette slices (house-baked, I believe) and bowls of dark, intense albeit rather salty French onion soup ($9) and a rib-sticking leek-and-potato soup made for a wintry day ($4).

Louis’ bill of fare brief starts with eight appetizers, from $4 (for a simple salad) to $12 (for a rich lobster bisque). A dozen main courses are $17 (for the ratatouille) to $42 (for roasted rack of lamb) and $38 (for the bouillabaisse “fisherman’s plate” or a rib eye or filet mignon with sauce Bordelaise).

We decided to polish our pronunciation skills with the aforementioned cassoulet ($28), a hearty meat casserole that originated around Toulouse in the Languedoc region of Southwestern France, and the ratatouille ($17), Louis’ winterized version of the summery vegetable ragout that traces its roots to Nice in southeastern France.

“Cassoulet” sounds a bit like “casserole,” and that fits, somewhat, if you can imagine a Mediterranean casserole full of southern French spirit and color; it’s a far cry from Garrison Keillor’s Norwegian-American Minnesota “hot dish.”

A Languedocian tradition with at least 800 years of history, this rich stew is traditionally baked under a cloak of breadcrumbs in a brown earthenware casserole. Louis wisely does not tinker with this tradition, serving a pot of tender white beans long-cooked with a collection of meats — roast duck, lamb, ham and a chunk of sausage — yielding a succulently fatty dish (in a good way) piled into dark-brown oval earthenware and served sizzling from the broiler.

The principle behind ratatouille is simple and natural: Start with the abundance of fresh veggies that abound in Provence; cook them with lots of olive oil, garlic and onions, thyme and other herbs; and assemble them into a finished dish that sings its own praises in culinary chorus.

Encounter ratatouille in Provence in the summertime, and you’ll usually get something bright and colorful, the essence of the summer garden in fresh sliced veggies. Visualize, if you will, the sinuous tower of stacked paper-thin veggie slices that brought the food critic Anton Ego to unaccustomed tears in the Pixar film “Ratatouille.” (For the record, ratatouille doesn’t really look like that, and come to think of it, few food critics resemble Monsieur Ego, either.)

For a winter dish in our vigorous climate, Louis turns ratatouille into something warmer and more consoling. Eggplant, tomatoes, onions and other good things were roasted dark golden-brown, then baked into a thick and hearty stew generously spooned over aromatic, herbal rice. It was so perfect for the occasion and so right for the dry, berryish Rhone wine that I came unfortunately close to abandoning table manners in my enthusiasm for every last bite.

Dessert was almost an afterthought, but a thin wedge of well-made chocolate meringue tart ($8) and dark, strong coffee ($2) put an exclamation point on an excellent French meal. Dinner for two, including two cocktails and a half-share of the wine, came to $110.21, with a $22 tip for efficient, graceful service.