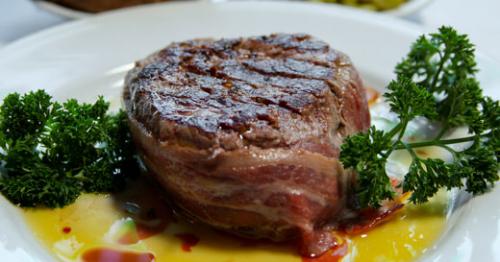 Imagine, if you will, a really excellent, life-like diorama, one of those fascinating museum displays that you’ll find in New York’s Museum of Natural History or Chicago’s Field Museum. It’s a large, almost life-size three-dimensional display that re-creates a historical scene, freezing a moment in time for our intrigued inspection.

If you think about it, Louisville’s long-standing and much loved steak house, Pat’s, on lower Brownsboro Road, is kind of like that, too. Bearing the name of its owner, Pat Francis, since 1976, and going back a generation or so before that in very similar form as Min’s Steak House (not to be confused with the unrelated “Dirty Min’s” cafeteria of days gone by), Pat’s could easily pass for a diorama depicting upscale Louisville dining in the Eisenhower era.

Only the prices have changed in this feast of a diorama. The dark, club-like interior, all dark wood and brass and glass, white tablecloths and Irish green napkins, would not have been in any way unfamiliar to our grandparents enjoying a night out on the town after a busy day of watching the Army-McCarthy hearings on black-and-white TV. Neither would Pat’s shamrock-loaded “Irish” ambience, which is really less about the Emerald Isle and more about a well-assimilated Louisville-style Irish-American culture filtered through parochial school and shopping for school clothes at Shaheen’s.

The bill of fare, too, is retro, heavily based on steak and potatoes (it is, after all, a steak house) and traditional trimmings served family-style. A peckish vegetarian will find little in the way of sustenance, although they’ll happily put together a lavish vegetable plate ($18.50) for those who insist. Nor is this the place for anyone who insists on knowing the pedigree of his slab of beef or wishes to inquire as to the name of the farmer. Feministas will be startled to discover that Pat’s carries into the 21st century the quaint practice of referring to smaller steak cuts as “Lady” size, but this seems to be the way Pat’s rolls.

If you’re in the mood for a good, old-fashioned meal like your grandfather might have enjoyed, though, it’s hard to find a more nostalgic eatery than Pat’s. They fill a distinct niche very, very well, from warm hospitality upon your arrival to smooth, dignified service from a team of servers who seem to have been around for a long time. Simple and traditional the food may be, but our party found everything we tried consistently well prepared, filling and good.

And yeah, it’s pricey. Pat’s may not quite scale the financial heights of the local steak house chains, but with its aged, hand-cut steaks topping out at $55.25 for a 32-ounce prime Porterhouse or $53.25 for an 18-ounce filet mignon, it’s right up there. Still, given a choice between dinner at Pat’s or an expense-account meal at Jeff Chris Morton’s, I think I’d keep it local and dine with Mr. Pat.

Soups and salads run $7.50 to $8.50, with appetizers moving well into double digits, topping out at $23.50 for a seafood sampler. In addition to those $50-plus steak specials, the beefy side of the menu ranges from $35.25 (for the 8-9-ounce “Lady” filet mignon) to $42.50 (for a 24-ounce Porterhouse). Ground sirloin or Irish meatloaf are $24.75. About a dozen veal, pork, seafood and fish options are clustered in the $25-$29 range, and chicken dishes start at $24 (for half of a fried chicken). Dinners come with choice of two vegetables, salad and a basket of warm mixed rolls.

There’s full bar service, of course, including a fairly substantial wine list, perhaps a bit spendy to match the menu, with a few options in the $30s but most higher, ranging up to triple digits. Several of us chose a Banfi chianti by the glass ($8.50), a good pick with steak.

Mary and I decided to save a few bucks, and calories, by going in on a shared medium-rare New York strip steak ($35.50 for the “Lady” portion, which was plenty) and a lavish veggie plate ($18.50) of perfect limas, peppery sauteed mushrooms and a crisp hash brown, in addition to the bountiful vegetable bowl sides. Several in our group went with the 12-ounce filet mignon ($38.75) ordered Pittsburgh-style, charred on the exterior, blood red within. All the steaks were cooked to order, the filet butter-tender, the strip a bit more firm-fleshed and flavorful.

The wedge salad ($8.50) was excellent, a chunk of crisp, cold iceberg almost as big as your head, sweet with a splendid creamy Roquefort dressing.

Key lime pie ($6.75), the traditional classic, could have come straight from Key West; and Reese’s peanut butter pie ($6.75) was as good as having a bag of Reese’s all to yourself with no one to watch you eat it all.

Our share of dinner for two came to $93.50, to which Pat’s added $15.20 under its policy of including a tip for larger groups. I left our excellent server, Chris, a few extra bucks to bring his tip up to 20 percent. (Pat’s famously declines to accept credit cards, but there’s an ATM on the premises.)