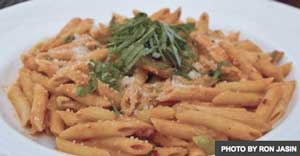 “Curst be he who moves my bones,” warns the tombstone of Billy Shakes, and forsooth, the bones of previous occupants Big Dave’s, Judge Roy Bean’s and others back to Fat Cats remain perceptible here. However, owners Doug Schutte, Jon DeSalvo and Scot Atkinson have put a new, solid flesh on those bones. Their bottom-up renovation delivers an urbane, artsy feel that is laid-back and accessibly upscale. Local art will rotate in like scene changes. A performance space will open upstairs this month, offering live theater and more.

A recent soft opening introduced the venue and the cuisine of Joseph Gadansky (formerly of Café Metro). The atmosphere was convivial, albeit a bit loud, as a jazz quartet played in a lounge adjacent to the dining room. The food, a solid, moderately priced menu of sandwiches, pastas, steaks and appetizers, will bring people back.
Pasta Diablo ($12.99) came with a salad of local produce that I didn’t want to end. The pasta was not spicy, despite the name. Its pink sauce was lighter and more appealing than a heavy cream sauce, with tender and plentiful chicken pieces throughout. The Tabard Inn ($8.99), a tender and juicy chicken sandwich, included abundant toppings on a ?fresh bun.
The bar featured eight draft beers and scores of bottled beers, wines and spirits, many of them local. We’ll be back for dessert — for the next performance, as it were.