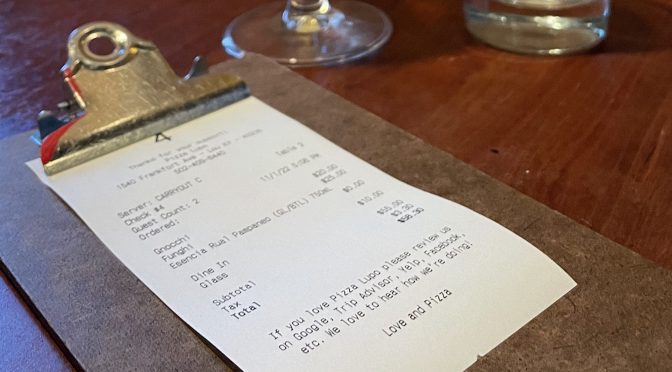 Here’s a great way to start a noisy debate: Ask a group of friends what they think about tipping. How much? On what? Should we have to do it at all? Ask ten people, get eleven opinions.

And that was before the pandemic.

After Covid-19 shut down indoor dining at Kentucky restaurants in March 2020 and a handful of operations went out of business, there was a lot of talk about how those of us who love the local food scene could help. “The region’s restaurants are struggling against this gut punch, and they deserve all the help we can give them through carryout, curbside, and home delivery, I wrote in a column a couple of months later. “Not to mention generous tipping.”

I’ve always tried to support restaurant servers well, as a matter of personal ethics and, in my reviews, to set an example. I usually tip 20% on food and drink, rounding up from there if service was exceptional. During the pandemic I tried to add a bit more still, and at less expensive places to forget the percentage rule entirely. If your meal at a modest diner cost $7, why not tip $7 more? I can’t think of any reason not to.

Are people getting tired of tipping?

But … it had to happen … as the nation, including Louisville, goes through a lull following the last Covid variant spike and hopes there won’t be another spike, people are getting tired of tipping. And that’s not even talking about the people who never did approve of the practice.

“Americans tired of leaving big tips,” the centrist political journal The Hill trumpeted this past June. “Experts say there is a perfect storm of factors, including inflation and lack of Covid-19 incentives, leaving increasingly ‘cranky consumers’ waiting for exemplary service before shelling out a little extra at the end.”

To get a sense of the local temperature, I queried social-media friends and didn’t get much sense of tip fatigue among some 100 responses. This may have been a non-representative audience of foodies and industry people, but none of my friends seem to be punishing restaurant workers for the faults of the economy right now.

“I despise tipping. But I do.”

“I despise tipping. But I do,” responded one friend in Louisville. “Sit=down full-service, 15–25% depending on the service and total bill. (I tend to tip a higher percentage on a lower bill).”

A friend in the local area offered this top-notch summary of what appeared to be the consensus: “For me, rising costs mean eating out less often, but still being generous with tipping when I do. 20% is the bare minimum, even when service was not at all good. I understand that so many places are running short-staffed, and I know servers’ jobs were already not easy before the pandemic. These servers and line staff are out there busting a hump to serve us. They still deserve to be thanked and treated with dignity, expressed through making sure they’re paid enough to take care of themselves.”

I can’t think of a thing that I’d add to that!

Let’s wrap up this week’s discussion with a few pardon-the-expression tips for you about navigating the tipping scene in the third year of this ongoing pandemic. These are my opinions. Feel free to push back in the comments!

How much should you tip for a sit-down restaurant? Takeout? Delivery?

In my opinion, 20% is the minimum, and, as I noted, I’ll increase that percentage at, well, diners, drive-ins, and dives where the tap is so light that 20% amounts to only a couple of bucks. I do try to tip the same amount on takeout, and I would do the same on delivery, although I don’t do delivery for reasons I’ll be glad to discuss some other day.

Did the pandemic change your tipping habits?

Yes, I try to tip a little more generously than before.

Did the pandemic change your restaurant dining habits?

Certainly during the early stages I went over to takeout only, preferably with no-touch curbside pickup. Once vaccinations were available, I went back to indoor dining.

Do you leave a larger tip at a diner or other inexpensive eatery?

Yes. Wanda at Joe’s diner works about as hard as Pierre at Le Snoot. It’s hardly far to leave Wanda a $2 tip while Pierre pockets $20. (Yes, I understand that Pierre may have to dip into his stash to tip out bussers and others who help, but he’s still coming out ahead.)

Would you ever leave a zero tip, or a penny, to “punish” bad service?

No. But I might talk to the server, or to the manager or owner.

I’d like to see it change, but the system is so entrenched that it’s hard for me to see where change might begin. Labor organizing and unions in corporate chains might be a good starting place, but I’m not sure how independent local restaurants can make the numbers work without substantial, traffic-crushing increases in pricing.

Still, the rest of the industrial world has found a way, so it’s … odd … that Team USA can’t do it. A British friend following my social-media conversation was gobsmacked by this Yank-centric conversation. “I’m staggered by this,” they said. “As a Brit I expect waiters and delivery people to be properly paid. If the meal’s been good or the service excellent I leave a few quid on the table. … Across Europe it’s usually made clear that tax and gratuities are included in the price, so I usually just round up the change to the nearest Euro. We really don’t have a tipping culture here, and I’m glad of it. It’s demeaning to expect employees to live on random handouts from clients; it’s the employer’s job to pay properly and price accordingly.”