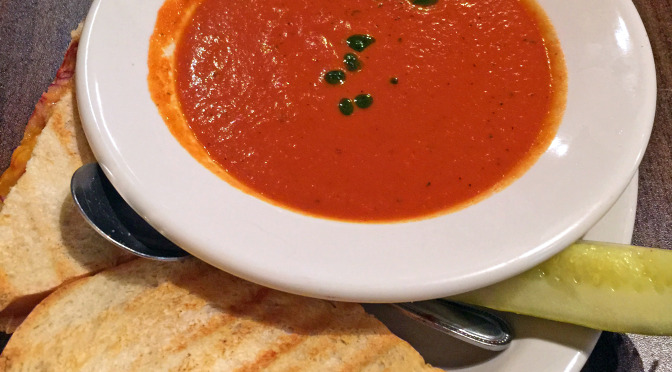 But I didn’t quite expect flames to come shooting out my mouth while my endorphins took off in a wild and crazy rush around my brain. Wooee! That sandwich is HOT! In fact, even the accompanying bowl of roasted tomato soup boasted a distinct kick of cayenne. Let me tell you, that was one feisty lunch.

I’ve followed Toast on Market since the very start, when the Louisville branch opened in its first location on Louisville’s East Market Street in the summer of 2006, before “that artsy gentrifying district on East Market” was widely known as NuLu. (I still kind of like TAGDOEM better, but that’s probably just me.)

Its arrival delighted a lot of people, apparently, and Toast was quickly anointed as a prime brunch alternative to Lynn’s Paradise Cafe, which even then was looking a little shaky. Toast has remained popular, and the lovely patio that it inherited when it moved a block west to the former Artemisia space in 2011 apparently just made a good thing even better.

Three years later, in a move so brilliant that it seemed obvious – after the fact – the same owners landed on East Market Street in New Albany, allowing use of the same name and the same menu in another renovated old building in another gentrifying zone that was also just starting to heat up.

One of the owners, Amy Wepf, I think, or possibly her sister Lisa – my apologies to them both for my uncertainty – wandered out during our visit and, in casual conversation, mentioned that they were thinking about opening a third location on Market in Jeffersonville. This turned out to be a joke, perhaps a standing joke, but she had me going for a minute there.

She was more serious, though, when she spoke of a fascinating study of Toast’s sales figures that led to a less-than-surprising conclusion: Taken on average, people in New Albany ­- or, at least, New Albanians who dine at Toast – have significantly different menu preferences than Toast’s NuLu regulars.

Accordingly, they’re thinking seriously about setting up separate menus for each location one day soon, bringing an end to nearly six years of menu mirroring. New Albanians are perhaps a bit more meat-and-potatoes than their hip NuLu neighbors. Pot roast is an easy sell on the north side of the river. Pan bagnat, not so much.

As you’d expect of a place named Toast, breakfast is available all day (both Toasts close in the midafternoon). For your convenience, the menu is broken into separate sections for breakfast and lunch, although I doubt many people have difficulty discerning the difference.

The selection is more than ample. too, although Mary gets her nose a little out of joint because a place named Toast does not actually offer toast on the menu. Well, French toast, yeah, based on brioche, from $7.50 (for The Classic with whipped cream and berries) to $8.25 (for the Monte Cristo, apparently not presented ironically, or the King, a French toast sandwich filled with peanut butter, bananas and sweet mascarpone cheese).

Omelets come with toast on the side, too. But if you want a plate of warm toast at Toast, you’re out of luck, although I expect if you asked nicely enough they’d make you one.

But let’s move on. You’ve got your French toast, omelets, pancakes, egg dishes (including toast and eggs for $6.25), omelets, granola and oatmeal and such. On the lunch side there are a dozen sandwiches, plus four grilled cheeses set off in a section on their own, and seven salads.

Only one item on the menu rings up the cash register at more than $9.75, and that’s the Atlantic omelet, filled with cream cheese and smoked salmon. If you’ve checked the price of smoked salmon lately, the $11.50 toll makes sense.

Adult beverages? Why yes! On the Indiana side, among other good things, bloody marys are $6.50 to $8; mimosas are $6.

We figured it made sense to try both breakfast and lunch items, so we went with Lemon Souffle pancakes ($8.75) and the aforementioned spicy chipotle grilled cheese sandwich ($8.50).

As for the sandwich, I believe I mentioned the heat. Wooee! The sandwich itself, however, merits praise in its own right: Good white bread is filled with sharp cheddar, tomatoes (a bit wan in November) and thin-sliced red onions and fiery chipotles, toasted on a panini grill until the cheese is molten. Cilantro was mentioned, but I couldn’t detect its characteristic aroma. Perhaps it couldn’t compete with the heat. The tomato soup was okay, bright red and quite thick, with that zippy cayenne heat.

The pancakes made a cooling antidote. Three tender, lemony beauties were overlapped on an oval plate, decorated with squiggles of vanilla custard, topped with a pool of sweet-tart blueberry compote and sprinkled with powdered sugar.