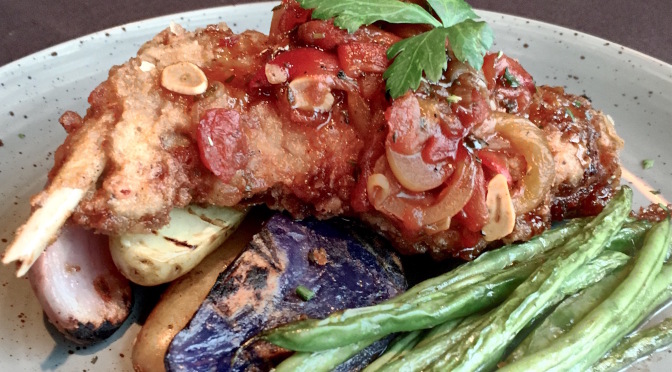 Sure, Louisville is named after a French king – Louis XVI, who later lost his head in the French Revolution – but let’s face it: This decision didn’t make us French.

Consider the obvious: Louisville has had damn few French restaurants over 238 years of corporate identity. Save for the long-running Le Relais and the attractive Brasserie Provence, French restaurants don’t come often, and they don’t usually stay long.

So I’m happy to report that our latest French arrival, La Chasse, which opened last autumn in the Highlands quarters vacated by Palermo Viejo, looks like a keeper. It builds on the strengths of its founders, Chef Alexander Dulaney, who came from Le Relais; and Isaac Fox, who presides over the front of the house, from Volare.

Palermo Viejo had a cozy atmosphere; so does La Chasse. At first glance, you might think it hasn’t changed much. But a closer look reveals a substantial redo, with thoughtful, urbane decor that speaks more of Paris than Provence. Think of a neighborhood bistro – earth tones, painted brick, a few paintings – that sets a comfortable feel, then stays out of the way. Same goes for earth-color tablecloths and napkins, fine but unobtrusive flatware and plates, and classy wine glasses.

A stylish bar now runs full-length, and it offers a thoughtful drinks program, which features creative cocktails sorted by style and a well-chosen, international wine list with most bottles starting around $40 and wines by the glass around $10.

La Chasse defines itself as “farm to table inspired French and Spanish fusion,” although I’d spread a broader net, calling it French-accented with highlights from Old World and New alike. Perhaps it’s the rabbit and elk entrees that underscore the name “La Chasse,” meaning “the chase” or “the hunt.”

About 15 starters and salads range in price from $9 (for rumaki, a modern take on chicken livers wrapped in bacon) to $15 (for a creamy lobster and artichoke gratin), or $20 to combine the $15 cheese or charcuterie boards into one.

Save for the one meatless option, a $18 puff-pastry tart with grilled mushrooms and fennel, just seven entrees start at $24 (for pan-roasted cod loin with shiitake and leek cream sauce) and mount up to $36 (for wood-grilled elk tenderloin).

Our friends Anne and Don joined us for a luxurious meal that I’d rate from pretty good to outstanding, depending on the dish. If there’s any consistent flaw, I’d name it as an excess of enthusiasm for “chef-driven” sauces and flavorings that were great when they worked but less awesome when they missed the mark.

The rabbit, for example, was first-rate. It was fried, an offbeat preparation that yielded a crunchy-tasty texture that supported its tender, subtle flavor. “You might say that it was similar to chicken thigh,” said Anne, “but it mostly tasted like good rabbit to me!” Crisp haricots verts and smoky, grilled halved fingerling potatoes were perfect accompaniments.

Salads also hit the spot, although portions were small. Anne wished she had some field greens in her otherwise “very French” salade niçoise with its lightly seared tuna and creamy quail egg, black olives and garlicky aioli. A $10 salad special featured a fluffy cloud of poached egg perched on frisée, garnished with fried prosciutto and “bacon croutons.” A $12 asparagus salad was outstanding, fresh, thin spears (prosciutto-wrapped if you like) with roasted shiitake mushrooms, paper-thin crispy herbed potatoes, topped with a soft-boiled egg and dressed in a caramelized shallot and chardonnay vinaigrette so appetizing that I could have drunk it from a cup.

The bouillabaisse ?was authentic French, chock full of fresh seafood. Less pleasing, though, was a hot-and-spicy flavor element that knocked out the more subtle umami flavor of the fish broth. French cuisine wins when the chef maintains a perfect balance of flavors that sing together like the members of a chorus.

A similar problem afflicted the wood-grilled elk, a juicy, tender tenderloin sliced in thick rounds. Unfortunately, its idiosyncratic raspberry-gin sauce was so assertive that, like the spicy fish dish but even more so, permeated the meat to the extent that it was impossible to get any distinctive meat taste beyond “beefy.” Fingerling potatoes and pencil-thin fresh asparagus were good, baby beets crunchy-al dente.

The tart was impressive, shiitake mushrooms and thin-sliced fennel baked in puff pastry and served on a square wooden trencher, garnished with fresh chèvre and caramelized shallots. Alas, it was heavily decorated with thick merlot gastrique, a sweet-sour red-wine reduction that reminded me of cheap balsamic vinegar and dominated the dish.

?Desserts were good. A dense, rich chocolate mousse spoke of France, and it was perfect, topped with coffee cream that made it even better. A bourbon custard spoke of Spain, a light butterscotch flan with just a whiff of bourbon and a “walnut crumble” that we wished might have had more crunch.

We paid for the wine and desserts for the group, punching our tab for two up to $144.16, with a $30 tip in respect of thoughtful, attentive service from our server, Jacob, who also came from Le Relais.