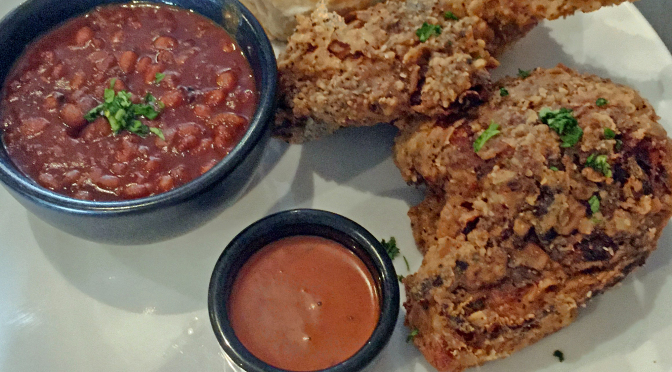 What in the Hell is a Gospel Bird?

No, wait, better make that, “What in Heaven’s name is a Gospel Bird?”

I’m pretty sure it’s not a winged creature that knocks on your door and asks if you have found Jesus. It’s not a dove that comes down with wind and fire, either.

Nah, it’s a restaurant, and a good one, too, a recent entry in downtown New Albany’s growing dining cluster. Southern-style fried chicken is a specialty, and that explains the “Bird.”

But, pray tell, wherefore the “Gospel”?

Apparently, Gospel bird is a Southern tradition — delicious, crispy, sizzling, fried chicken served in potluck splendor after church. I wonder how I missed out on that.

But don’t worry, no one will evangelize you at this Gospel Bird. You’ll find no hymnals in the pews, and the closest thing to a sermon you’ll hear is the friendly server’s recital of the dessert menu.

But you will get good food, and plenty of it, at prices so reasonable that you’d be embarrassed to drop any less in the collection plate.

Owner-chef Eric Morris (whose name you may know from Loop 22, Hammerheads and Game), and head chef Ethan Ray (late of Roux, Rumplings and more), opened Gospel Bird in February in an attractive old storefront in New Albany’s historic downtown. It specializes in chicken, and in a broader range of Southern and regional flavors, too.

The long, high-ceiling room offers a nostalgic feel with its exposed red brick, terrazzo floors, big storefront windows and undraped wooden tables. All those hard surfaces can foster a noisy scene, but Mary and our friend, Ashley, and I were able to carry on conversations without resorting to hand-signals, or texting.

The current menu was cut back a bit from the original bill of fare (which, however, remains on the eatery’s Facebook page as I write this). No more crispy mushrooms, no more Okra Winfrey and no more enticing chicken and biscuit combinations, alas and alack.

Both lunch and dinner menus still offer good variety, though. There’s still plenty to choose from among seven appetizers and salads ($5–$7), four substantial dinner sandwiches ($12–$14) and seven dinner options (from $14–$18).

The full bar offers short, well-chosen wine and beer lists and a handful of creative cocktails. I couldn’t resist the “Bitter Howdy” ($8), which proved to be a tall can of GoodWood white ash lager with a shot of Cynar artichoke liqueur drizzled on top, an odd cocktail, but good enough to sip through dinner. Ashley gave at least one thumb up to the Both Barrels ($9), a fancy-tequila take on a Pisco sour.

Who doesn’t like fried green tomatoes? Gospel Bird’s rendition, dubbed the Idgie and Ruth ($7), is an interesting one — a fancied-up version with a combination of flavors almost good enough to overcome a fundamental flaw: a puny ration of skinny fried tomatoes. The tomatoes were OK, but it was hard to taste them under piles of silken, tangy pimento cheese, crunchy-tangy pickle slaw and piquant horseradish mustard. “Too much of too many good things,” Ashley said. “It all tasted good together,” Mary added, “but it just probably shouldn’t be called fried green tomatoes.” Maybe not. Bottom line, we cleaned the plate.

This place is really about chicken, though, so we sampled chicken two ways, and we found both perfectly brined, breaded and cooked, and profoundly satisfying, moist and flavorful — pan-fried in a not-too-thick, old-fashioned Southern-style buttermilk breading, laced with black pepper.

The house Southern Fried Chicken ($15) offers two hefty pieces, half of a chicken, with choice of side and a flaky buttermilk biscuit. The Yardbird ($13) is a chicken sandwich featuring a sizable boneless breast on a hefty burger-style bun, piled high with crisp bacon and a slice of cheddar and a little slaw hidden in there somewhere, with house-made “Gospel sauce” — a blend of spicy fire sauce and sweet-sour honey-mustard — on the side.

Amid all that chicken, we had to throw in a plant-based option for those who like their dinner animal-free. Gospel Bird’s house-made black bean burger, dubbed Fade to Black ($12), made us put our psalms together (sorry) for its meaty-textured grilled black-bean patty, loaded with earthy mushrooms, spicy piquillo peppers, cheddar, lettuce and tomato and a schmear of avocado puree, built on a golden-brown, eggy bun studded with black sesame seeds.

Entrées come with a side dish, and sides are also available a la carte for $4 to $6. Ours were worthy: Cauliflower grits combine two unexpected partners into a happy marriage that’s thick, smooth and seductively flavored. Chorizo baked beans were thick, viscous even, with a nice balanced barbecue flavor that wasn’t cloyingly sweet. Mashed potatoes with white chicken gravy were tasty and homemade. A rolled and cut biscuit was perfectly fluffy and light. A little butter and jam would have been welcome.

Dessert, an apple tart with Neapolitan ice cream, was OK. Dinner for two was $40.66, and a $10 tip for server Isaiah.