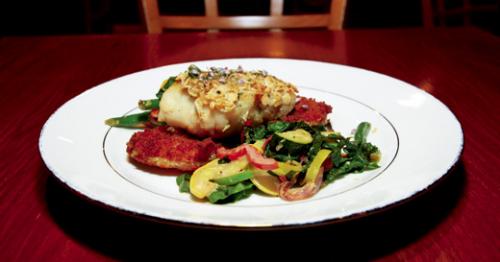 Few of us are eager to admit we’re getting older. Every now and then, though, some sudden recognition of time’s passing steps up and smacks us in the face with a solid reality check.

Take Equus, for example: A local destination restaurant that opened just a few years ago. Well, OK, OK, it opened in 1985, but who’s counting? Not me, that’s for sure. In some ways, after all, Equus never seems to change very much.

It remains in the original location, filling part of the first floor of a rather nondescript white-brick office building in St. Matthews. The owner and executive chef was, and remains, the venerable Dean Corbett, more venerable now than ever. And some of the trademark Equus dishes of those early days remain very much the same.

Perhaps most important, the essential vibe of the place has been consistent over the years, undergoing periodic alterations in decor and style but always remaining casually upscale, stylish if a bit clubby, but never stuffy.

As we settled in for dinner the other night, the defining word that struck me was “civilized.” Even with an ample selection of tasty libations available via at least two welcoming bars and dining rooms, it’s not the kind of place where you’d ever expect to hear angry voices raised or see a fight break out. Unless, perhaps, two desperate diners both wanted the last bowl of fumé in the house.

I had been eager to get back and see how the place has fared after its two previous side-by-side personas under Corbett’s domain — the fancy Equus Restaurant and the casual Jack’s Lounge — had merged into Equus & Jack’s Lounge.

On my last visit three years ago, just after that merger, I had enjoyed the food as much as ever but felt a trifle skeptical about how this marriage between different personalities would work out long-term.

I probably shouldn’t have worried. This re-invention, after all, wasn’t the first but had followed a recession-driven menu remake a year or two earlier, in which some of Equus’ more pricey dishes had given way to a shorter high-end selection and an array of affordable small plates.

And for a year or two before that, Corbett’s attention had become divided between the Equus and Jack’s venue in St. Matthews and his new, fancier Corbett’s — An American Place located in the far East End. Even before that, the addition of Jack’s itself, earlier in the 2000s, had made clear that new directions and new ideas aren’t out of the question here.

So how’s that combined Jack’s and Equus thing working out? Very well, I’d say. While Corbett reigns as executive chef over both the Equus-Jack’s and Corbett’s kitchens, the arrival of executive chef Tavis Rockwell, an eager and competent 20-something Sullivan University culinary grad who worked his way through Corbett’s kitchen to become kitchen boss at Equus, has added new flavors to the menu without banishing the best of the old.

Rockwell retains the flexible mix of small plates and more pricey entrees that have been the custom since 2009, with more than 18 “small bites,” soups and salads, almost all between $6 and $10, topping out at $15 for a large meat-and-cheese plate. Sandwiches are $10 to $12, including the justly famous Jack’s prime burger ($10); a daily flatbread pizza or pasta dish is $15.

Nine or 10 main dishes, many of them built on locally produced beef, pork or poultry and, in season, farmers-market produce, start at $16 (for first-rate fried chicken) to $32 (for Creekstone Farm beef filet); sea bass is market price.

We put together a bunch of small bites and one of Rockwell’s mains, starting with bowls of the fumé, which gains its rich texture from a combination of mushrooms, heavy cream, arrowroot and veal stock, which may come as a surprise to vegetarians who order it expecting an animal-free fungus treat.

Crunchy, munchie “tater tots” ($8) are nothing like the industrial food Mom used to pull out of a box and fry; they are sizable balls of creamy, textured mashed potatoes contained in a golden-brown crust and served with an earthy truffle aioli.

Rockwell’s almond-crusted corvina ($19) put an exclamation point on the meal, an almost-boneless fillet of mild, delicate firm white fish crusted in chopped almonds and plated with a couple crisp, hot-spicy fried green tomatoes and a mélange of fresh veggies in a silken herb-garlic beurre blanc.

With refreshing Campari and soda for starters and a glass of Argentine Malbec with the meal, dinner for two came to an entirely reasonable $78.44 plus tip.