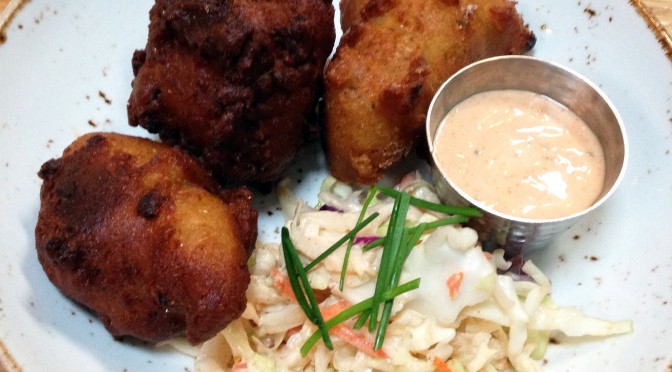 Folks in our Crescent Hill neighborhood have been watching with considerable anticipation as a crew associated with Louisville’s Bluegrass Brewing Co. sped through a major “gut rehab” of the old Darkstar tavern, converting what had been frankly a rather grim saloon into an airy, inviting temple to all things local beer and food.

We dropped in on opening night, Aug. 25, and saw tons of our neighbors there as well as some of the city’s most ardent beer lovers drawn from farther afield. It’s way too soon for a formal review – I look forward to the happy opportunity to visit repeatedly before I go there – but I think I can already say without fear of contradiction that this place is going to be a hit.

Consider if you will the potential delights of a 50-tap row of draft beers entirely limited to about a dozen local and regional craft brewers, and an intriguing, affordable menu that sprawls over two large pages, incorporates everything from poutine to shrimp and grits and short ribs, and includes many vegetarian and gluten-free options. It names and praises a dozen local farms, farmers and food-and-drink businesses that provide the provisions, and so do we.

We ran into a beer-loving pal and, among us, knocked back a set of oyster hush puppies ($9), a Caesar made with charred romaine ($7), an intriguing veggie burger made with smoked eggplant and barley ($10) and an earthy, creamy quinoa salad ($10), and a sampling of pints, and were much impressed at the way the kitchen and front of the house were rocking it on Day One.