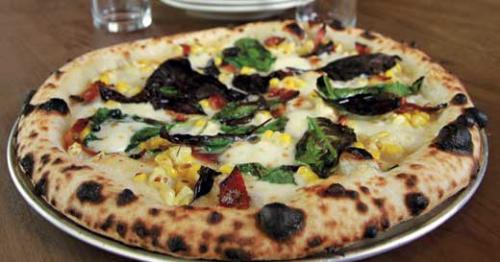 The Garage Bar looks so much like an old, run-down country gas station that I can barely go in without feeling tempted to pick up a few packages of peanut butter crackers and a cheap six-pack and go out back with my buddies to smoke, tell dirty jokes and drink beer in the dark.

This impulse seems reasonable enough when you consider that this hot new spot really was an auto repair shop and gas station back in the day (and a neighborhood tavern before that).

Where 21c and Proof are upscale and classy, though, Garage Bar is tongue-in-cheek downscale. But trust me — although one needn’t don jacket and tie for a dinner out at Garage Bar, the blue-collar vibe is largely illusory. Paley’s award-winning creativity, played out as Kentucky-accented Tuscan at Proof, shows up here as a gently frou-frou spin on country eats. That is, if country folks regularly dined on designer pizzas that run $15 for a personal-size pie, as well as country hams and oysters bearing fancy appellations.

Speaking of pig meat, Garage’s “ham bar” comprises a row of bar seats along a window offering a direct view of the chefs at work, sort of like a sushi bar but without the raw fish. You’ll see ham slicers and oyster shuckers at work, and cook-acolytes processing around a tile-lined, wood-burning pizza oven with flames rising behind an open door, just like the ovens you’ll find in Naples, which by no coincidence is the birthplace of the noble pie. Pizza, that is.

On the bar’s website, Paley explains this seemingly disparate bill of fare: “In Italy, pizza is all about regionality,” he writes. “The crust, toppings and shape of the pizza are all dependent on whether you are in Rome or Naples. The Southern specialties we serve reflect our own regionality. Making craft pizza is an art, and I love that aspect, but I also wanted to highlight the people and products that we have in our own backyard.”

Fair enough. The spots of dark caramel wood-char on the thin pizza crusts do remind me of the real Neapolitan deal, the high-gluten dough makes for a chewier edge (think BoomBozz on a good night, plus char marks), and the offbeat but splendiferous non-traditional toppings put these pizzas in a realm by themselves.

The pizzas are individually portioned but big enough for sharing, and come in seven or eight guises that range in price from $11 (for a simple “milled” fresh tomato pie) to $16 (for several goodies including the trademark sweet corn pie).

A tasting platter of thin slices of four artisanal hams (currently S. Wallace Edwards & Sons from Virginia; Benton’s Smoky Mountain from Tennessee; and Broadbent and Father’s, both from Kentucky) is $19. During our visit, the oyster list featured Amai ($3.50 per oyster) and Olde Salt ($3.25) from the U.S. West Coast, Rappahanock ($3) from British Columbia, and Sun Hollow ($2.75) from the East Coast. Snacks and salads round out the small plates, and a trio of larger plates such as steamed clams ($16), crispy turkey wings ($18) and country ham sausage ($17) serve heartier appetites.

The beverage list includes an extensive choice of bourbon, of course, and other liquors, iconic soft drinks (Nehi, Cheerwine and Ale-8-One) and a well-chosen list of wines that are all under $40 for a bottle and $8 for a glass, plus a good selection of bottled beers and regional draft beers.

Our party of seven Crescent Hill neighbors, ranging from gray to grayer, approached with some caution, as we had heard this was a hipster hangout. There was no need to yell “Git off my lawn,” though, as the happy, noisy crowd ranged from Millennials to Boomers and beyond.

My salad choice, the local heirloom tomato ($8.50), was a delight to the eyes and palate: chunks of juicy red, orange and yellow tomato with bits of fior de latte mozzarella with tiny basil leaves in a sensual vinaigrette. Mary gave her traditionally styled Caesar ($8) two thumbs up. An order of rolled oysters ($8) was light and delicate, a far cry from the heaviness that was the stock-in-trade of the late Mazzoni’s.

Pizzas all around included such goodies as the aforementioned sweet corn ($16) with tender niblets and fresh basil on a creamy, garlicky base. A classic Margherita ($13) and a Benton’s country ham pie ($16) were perfect, and Mary’s pick, a special “New Sicilian” topped with orange cherry tomatoes, julienne onion and fennel, anchovies and cheese and a seductive zing of lemon zest, was a revelation: Lemon on pizza! Who knew?

Again, it’s not gas station-cheap here. Still, a lavish meal with a couple of draft pints from Indiana’s Three Floyds and San Francisco’s Anchor came to a reasonable $71.71, plus a $15 tip for consistently careful and courteous service despite a wall-to-wall crowd.