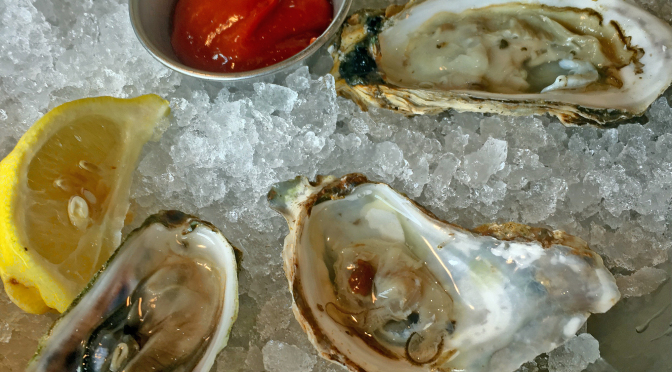 J.P. Morgan famously said that if you had to ask how much his yacht cost, you couldn’t afford it. The good folks at River House Restaurant & Raw Bar may have had this iconic wisdom in mind when they set up their “reserve” wine list for their new eatery in the yawning riverside quarters that once housed Falls City Boat Works.

This lofty roster of trophy wines tops out at a cool $500 for a bottle of the sought-after Mondavi-Rothschild Napa Valley Opus One. That’s too rich for me, but then, so is a yacht.

Happily, the rest of the wine list, the beers and cocktails at River House, and the lunch and dinner menus, too, are priced around average for upscale dining, with dinner entrées from the middle teens to the middle $30s.

Unfortunately, it’s not only the pricing that’s average. So, alas, is the fare. Now, average isn’t bad, mind you. Our party of four cleaned our plates, mostly, so I’m not calling it out as bad food. But in a Lake Wobegon world, where we want all our children to be above average, a C grade is disappointing when you wanted an A.

The former yacht storage showroom is spacious, and its floor-to-ceiling window walls afford excellent views of the Mighty Ohio for those at the long, double-sided bar and the favored tables along the north-side windows. The decor is minimalist, and that makes sense — why compete with nature? Wood tables are undraped, and set with good quality flatware and gray cloth napkins. A massive stone wall with water flowing down mirrors the “water wall,” writ large, at Varanese, Chef John Varanese’s Frankfort Avenue restaurant.

River House self-describes its bill of fare as “regional cuisine with a Southern flair,” but I’m not feeling that. I’d call it general American, with a whiff of California. Maybe it’s the frequent use of Maker’s Mark 46 as an ingredient that bestows a culinary drawl?

Small black skillets filled with cornbread begin the meal, and it’s pretty good: fine-textured and sweet as cake, with a ball of soft butter on top.

A couple of tasty, creative cocktails went well with the meal. Cardinal Sin ($12) seemed to be a riff on the Manhattan, with Maker’s 46, Noilly Prat and a squirt of orange bitters, fancied up with rations of Bombay gin and Cynar artichoke liqueur. The River City Boat Works cocktail ($8), was a refreshing quaff, a mix of New Amsterdam Gin and white grapefruit juice in a tall, ice-filled glass, with a salted rim and a rosemary sprig garnish.

Four fresh oysters on the half-shell, two each Long Island bluepoints and Prince Edward Island salt aires ($4.50 a pair), were fresh if a bit undersize; cold and briny, a lot of flavor.

You might think “pulled chicken” would be a Southern thing — a mound of shredded barbecued bird. If you think this at River House, you would be wrong. Oven-roasted pulled chicken ($14 for a half-portion, $18 for large) is a pale pasta dish, a bowl of cavatappi (corkscrew) pasta with a sweet cream sauce, thick enough to stand up a fork and studded with sweet corn kernels. We eventually found some shreds of bland chicken in there, but there wasn’t much, and it didn’t have much flavor. The green chiles in the sauce were missing in action. It was edible, sure, but average would probably be generous, earned mostly by the interesting, peppery green pea-leaf garnish.

A meatless entrée, “seasonal inspired vegetables, Chef John’s creation,” looked like a must-try for $18. The good news: This plate contained lots of fresh, tasty veggies. I’m having a hard time going along with “inspired” or “creative,” though. Tiny, rather mushy new potatoes, barely-cooked zucchini rounds, smoky grilled asparagus spears and an al-dente half of a baby bok choy were lined up in neat rows, drizzled with sweet balsamic. Good flavor and healthy? Sure. Average? Yes.

Praline pie with chocolate and caramel sauce ($8) was yummy, a shallow tart filled with intense chocolate and chunks of pecan, but it didn’t say praline to us, and that was the word that drew us to the dessert in the first place.

Red Hot Roasters coffee in a French Press pot ($6.50) sounded like a great idea, but that’s when things got weird. When you order decaf, you don’t get fresh-ground coffee in your press pot. You get a pot of decaf from the coffee machine, presented and pressed down with great ritual but no actual effect. It tasted bitter, burnt. Below average, sorry.

Our share of dinner came to $88.51, which isn’t out of line by fancy-eatery standards, especially with two cocktails included in the toll. Our friendly server, Jerry, seemed a little more distracted as the place got busy, but not enough so to get all chintzy about a 20 percent-ish $18 tip.