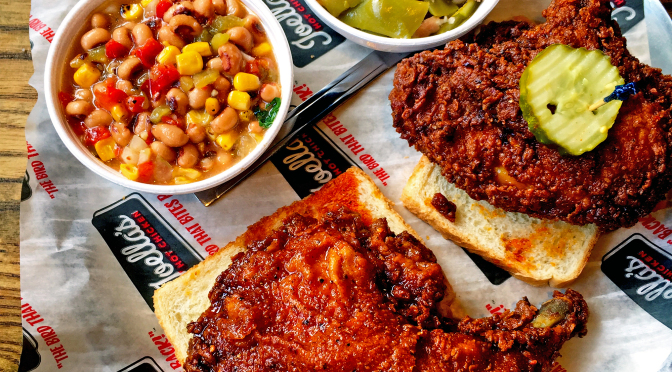 “Which came first? The chicken or the egg?” Have you ever wondered about the ultimate answer to this existential question? Who hasn’t? We found a tasty answer at Con Huevos in Clifton: It’s both! Order up a ration of Tamal de Mole con Huevos, and you can have your egg and your chicken too, all gussied up in spicy-savory Mexican flavors.

But wait! There’s more! Just out the road a piece, the buzzy new Joella’s Hot Chicken is all about chicken, all of the time, and there’s nary an egg in sight. Eat all the chicken! Yes, you can do that at Joella’s. the latest concept out of the productive mills of local eats entrepreneur Tony “BoomBozz” Palombino.

Joella’s appears to be a chain-in-the-making; its website already has spaces lined up for branches to come in Middletown, Lexington and Indianapolis. It’s located in the Frankfort Avenue quarters that long housed a BoomBozz Pizza, now moved into a larger space on the strip in St. Matthews. Joella’s kicks the decor up a notch with a log-cabin look that’s more country than urban, as befits a dish and a vibe in which fried chicken and barbecue meet and mingle.

Hot Chicken has long – well, 70 years long – been a quick-food delight in Nashville, where it enjoys iconic status akin to Louisville’s own Hot Brown. It got its start as inner-city soul food, fried chicken jacked up with fiery sauce and served on white bread to catch the bountiful drippings of red grease.

Joella’s menu is simple: Choose your chicken plate, with two sides included, from a dark-meat quarter ($8.50) to a half-bird ($12). A plate of three wings or three tenders goes for $9; you can mount ’em on a waffle with spiked honey or maple syrup, if you like. Choose your plate, select your spice from five levels (“Southern = No Heat” to “Fire-in-da-Hole = Inferno.”)

We tried a medium-spice half-chicken, “Ella’s Fave, Burst of Flavor and Lil’ Heat.” Separate light and dark-meat quarters were dusted with spices, breaded and deeply fried to a dark reddish-mahogany, placed on generic white bread and doused with a thin, vinegary reddish sauce. The meat was moist and tender. and even the dark meat was almost “white.” It’s probably not free-range, locally pastured chicken. The menu makes no such claim, and we did not inquire.

A half-dozen sides were serviceable, if not inspiring, with a significant presence of what I suspect from its scent might be American green-can Parmesan (“Parmeejun”). Flat Roma green beans were simmered with bits of bacon. Black-eyed pea salad was tasty: cold beans and corn niblets, peas and peppers in a vinegary-sweet dressing. Mac-and-cheese was creamy, stovetop style; sweet vinegar slaw was crisp and sweet; kale crunch salad wasn’t crunchy, and Parm garlic fries were thin-cut and crisp, sprinkled with “Parm.”

When Con Huevos arrived in Clifton at the end of last winter, I was over the moon. A Mexican place! Close to my house! Featuring breakfast! (And lunch, too.) It was cozy, warm, run by nice people. What’s not to like? I stretched it out just because I could, making three or four visits before posting a glowing review.

The other morning, craving Mexican, I thought, what the heck? It’s been six months! Let’s go see how it’s going.

Me gusta! I’d say it’s going quite well, with one observation: The chef’s style seems to have evolved from simple diner-style presentation – easy and quick – to a more refined technique of attractive, artful plating. Not that there’s anything wrong with this. In my opinion, artful plating reflects a genuine care for presentation that’s congruent with genuine care in the kitchen. This shows in the tasting. But don’t be surprised if your dish arrives in a vertical presentation or “deconstructed.”

That’s what happened with the Tamal Mole con Huevos ($10.99), the aforementioned eggs-meet-chicken dish. Rather than arriving in a cylinder of moist masa dough encircling a filling, steamed in a corn husk and thus presented, with a bit of salsa, it came neatly arranged: A block of rather dense masa was topped with a good poached egg (normally it comes with two, but we held back) and a mass of shredded chicken napped in dark, savory mole sauce and plated with crisp pickled onion and colorful pale-green cilantro crema and reddish-orange chile sauce.

Con Huevos isn’t really a budget breakfast, either: Two breakfasts and strong, fresh coffee brought us up to $27.54, and the iPad point-of-sale system made it easy for me to reward cordial, competent service with an automatically calculated 25 percent tip.