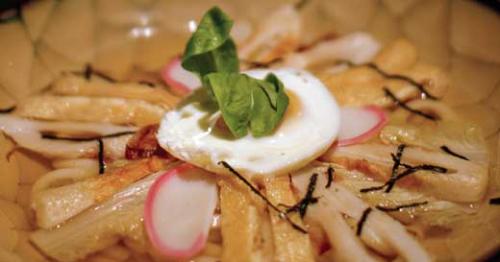 If you get out to the Pacific Northwest at all, you’re probably familiar with Wild Ginger, the regional restaurant phenomenon that has captured Seattle foodies’ attention with its Southeast Asian fusion cuisine.

And if you do, your eyes may have popped wide open when the signs advertising a new spot called Wild Ginger went up on the former Café Metro’s doors in the autumn of 2010. Could it be?

Bardstown Road’s new Wild Ginger Sushi Bistro is not connected with the Seattle eatery, or for that matter with Wild Ginger restaurants in Franklin, Tenn., Great Neck, N.Y., or even the one in Hyde Park, Cincinnati.
There’s no connection with television Chef Ming Tsai’s Blue Ginger in suburban Boston, either. Apparently Asarum canadense, the American spring wildflower that’s called “wild ginger” for its edible, gingery root, is too common a plant for its name to be copyrighted.
But that’s not important right now. What’s important is that it ably fills the gaping hole left in Bardstown Road’s restaurant row by the September departure of the aging Café Metro after 25 years as a neighborhood dining icon.
An attractive, thoughtful remake of the old Metro has retained its upscale comfort while adding a distinctly Asian sensibility. The intriguing menu combines first-rate sushi with tastes of Japan, Thailand, China and Korea.
If you knew Metro well enough to walk through its cozy three-room quarters in the dark, you’re not likely to trip over anything in Wild Ginger. Turn on the lights, though, and you’ll discover a setting more like Tokyo or Shanghai than Bardstown Road.
The front room still houses a bar … but now it’s a sushi bar. Step up the short ramp and you’ll be in the familiar dining rooms, with their storefront windows looking out on Duker Avenue and Uptown Café, Metro’s still-extant sibling across the way.
The pan-Asian menu is extensive, and it takes a while to figure it out. It starts with a broad selection of sushi and sashimi, available à la carte, from $3 to $8, or in combos, from $11 to $38. Check out the tuna tartar ($12), artfully served in an oversize martini glass. (We didn’t order it, but spotted one going by on a server’s tray and were tempted to nab it.) Nearly 30 “special rolls” are $6 to $14, some boasting curious innovations. I’d like to try the California cream ($6), a California roll with cream cheese added to the usual suspects.
It took me a while to grasp the difference between the “Specials” and the “Entrées,” about two-dozen dinners priced from $10 to $25. The entrées, as it turns out, are traditional Japanese dishes — teriyaki salmon or shrimp, fried tempura, noodle dishes, schnitzel-style tonkatsu and more. The specials hail from the rest of Asia, ranging from Korea (Bibim Bop in a stone pot, $13) to China (crispy tofu Sichuan-style, $10 to $14) to Thailand (Thai curry or pad Thai, $14).
Want small bites? There’s an extensive list of mostly Japanese appetizers, including numerous sushi apps, mostly priced in the single digits.
The wine list is short but contains some interesting items and should offer decent pairings with the Asian fare. The beer list features mass-market labels, although I was delighted to find generous glasses of draft Kirin and Sapporo for $2 during an unspecified grand opening period.
Our friend Sarah joined us, and we cut a pretty good swath through the menu, opening with appetizer orders of lettuce wraps ($9). We took the spicy lamb option and were rewarded with a mix of mild ground lamb and fine-chopped onions in a modestly fiery sweet-hot sauce, served with long strips of crisp romaine ribs as edible spoons.
More small plates: Agedashi tofu ($4) consisted of bite-sized, gently fried cubes of snow-white tofu, the crunchy skin surrounding a steaming, creamy interior, and was served with thin strips of edible seaweed and a salty, light soy-based sauce. Shumai dumplings ($5), familiar from Chinese dim sum, are light, puffy dumplings with a chopped shrimp mixture at the center.
Next came an array of sushi: Rainbow Roll ($10), based on a California roll but topped with a colorful array of red tuna, white tuna, snapper, a cooked shrimp and more. Nigiri sushi bites à la carte included pairs of red snapper ($4), salt-water eel ($5), tuna ($5) and yellowtail ($6). All were sizable, testing the usual practice of consuming nigiri in a single bite, and impeccably fresh.
Tempura udon ($10) came on two plates. The first featured a vertical architectural arrangement of perfect tempura, prawns, onion, daikon, carrot, a broccoli floret and more, cloaked in crunchy panko breading and fried grease-free; the second a generous bowl of udon wheat noodles in warm, salty broth with thin fish-cake rounds, scallions and other goodies.
Pad Thai with shrimp ($14) was generously portioned but idiosyncratic; its flavor owed more to “fusion” than to any authentic Thai recipe. A large mound of rice noodles (bean sprouts were merely a side garnish) bore a salty, aromatic sauce, eight or 10 medium shrimp, chopped peanuts, scrambled egg, pressed tofu and sprigs of fresh basil. Not bad, and so plentiful that the boxed leftovers were good for two lunches.
Both dishes came with steaming, salty miso soup with tofu and seaweed, and a Japanese salad of iceberg and romaine in a sweet-tangy, creamy ginger sauce.
There’s been a lot of speculation about how Bardstown Road can support yet another sushi restaurant, particularly one just a few doors from the popular Sapporo. In my opinion, Wild Ginger’s quiet, comfortable atmosphere and pan-Asian style is yin to Sapporo’s noisy, edgy Japanese techno-pop yang. There’s plenty of room for both, and more.
Dinner for three totaled an attractive $80.14, and attentive, friendly but unobtrusive service earned a $20 tip.