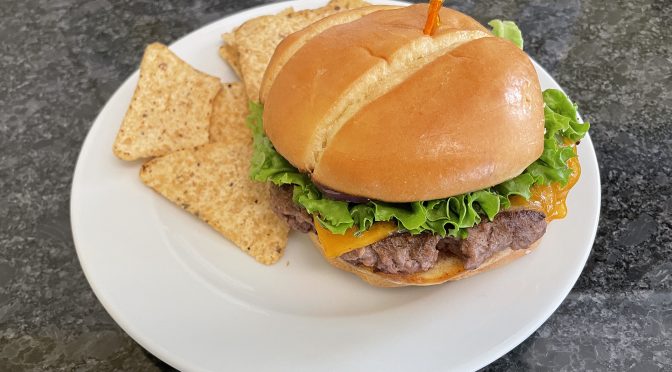 Ahh, Shady Lane Cafe! This lovable little East End diner-style cafe has been a popular lunch (and weekend dinner) spot since Bill Smith and Susi Wood opened it around 2004. It earned deserved popularity for its iconic Brownsboro burger and much more.

All good things eventually move on, though, and in August 2019 Bill, short-order chef and poet, and his wife Susi, amiable host and professional singer, turned the business over to another couple – Carol Reeves and Satbir “Shan” Singh – in August 2019.

The new owners have maintained the same high level of quality and popularity. When I dropped in to pick up a takeout lunch on a recent Saturday, every table in the little space was filled with apparently happy diners, and the line to the counter extended all the way back to the door.

Bill and Susi intended it to turn out that way. “It is with a profound, bittersweet sadness that Susi and I would like to announce that we will soon be leaving our little Shady Lane Cafe behind,” they wrote on social media in 2019. “We are leaving it in the hands of a wonderful young couple who are eager and enthusiastic to continue, improve. and grow on our fifteen year legacy.”

The new owners and old worked together to ensure a smooth transition, and I’m happy to report that every time we’ve dropped in since that switch, the food – especially that burger – has been on point. From one master of the flat-top short-order grill to another, with a consistent emphasis on quality and welcoming service at the counter: If only every restaurant transition could be so smooth.

So: We go to Shady Lane, we get a Brownsboro burger. That’s the rule. It’s $8.50, add half a buck if you want cheddar on top and of course we do.

Then a curious thought crossed my mind: As I’m sure you’ve noticed, I’ve been following the trend toward high-tech plant-based meat like the Impossible and Beyond Burger, not to mention KFC’s recent Beyond Chicken launch.

Well, Shady Lane Cafe has an estimable veggie burger too. It’s $9. and there’s nothing high-tech about it: Singh makes it from real vegetables, without a single ingredient that we can’t pronounce. It’s not intended to taste exactly like a meat burger. It’s just meant to taste delicious, and to fill a burger-shaped space for anyone who doesn’t want ground beef right now.

Then a light bulb went off: Let’s get a Brownsboro burger and a veggie burger and, well, not compare them exactly – they’re different animals, or maybe one animal and one not-animal – but consider them side by side.

Of course, Shady Lane is not just about burgers: In addition to the two burgers, nearly 20 sandwiches fill Shady Lane’s menu. It’s all good and well-made, and it’s just about all under $10. For an even more thrifty lunch, you can choose half of a sandwich and a cup of soup for $9.50.

But let’s get right to it: How about those burgers!? They’re both delicious, obviously different, but I’d be happy to find either one in my takeout bag.

The Brownsboro burger features a 1/3-pound patty, cooked to your order, is served on a good burger bun, light yet substantial and slightly sweet. Ordered dressed, it comes with fresh leaf lettuce, decent-for-the-season tomato, red onion, and Cheddar or other cheese of your choice for a 50-cent charge.

Assuming that the burger would continue to cook in its takeout box, we ordered it just medium rare, and it remained pink in the center all the way home. It was nicely browned on the surface, and exceptionally tender within, very finely ground and almost fluffy. It had a great beefy taste. With the well planned dressing and simple but tasty bun, it earned A-plus on every aspect of burger preparation.

Could the veggie burger compare? Yes, it could. Making no effort to simulate beef, it was a delicious chickpea patty – something like falafel, something like Indian channa tikki – with a meaty texture closely akin to ground beef, with colorful veggie bits that appeared to be edamame and yellow corn kernels popping out. The texture and flavor were grate. Top it with Cheddar and dress it like the Brownsboro burger and it was similar-only-different, a delicious burger with no animals harmed in its preparation.

An order of onion rings ($3.25) hit the spot. Shady Lane has always had excellent rings, and these were right up there with the best: Crisp breading over thick rings that were crisp yet juicy inside; grease-free and admirably tasty.

Chocolate layer cake, the dessert of the day, ($4.75) was very light and fluffy, with what I believe was chocolate cream cheese icing: Creamy, light, sweet and gently tangy. A huge wedge might have been enough for three servings, but we demolished it in two.

Noise Level: The place was packed and filled with a happy but not painful noise.