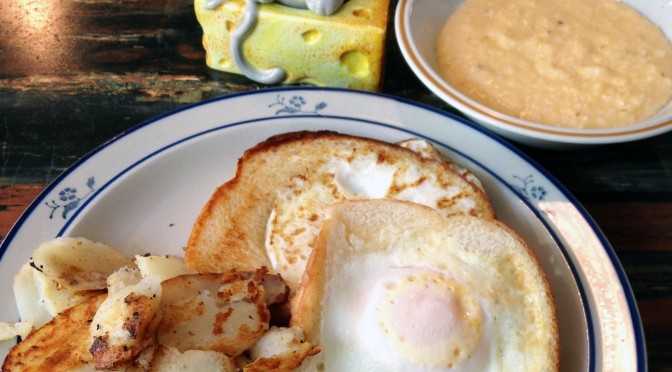 Frankfort Avenue – or just plain “The Avenue,” as its neighborhood business association likes to call it – has come a mighty long way in the generation since the late, lamented Deitrich’s started serving creative cuisine in an upscale environment in the old Crescent Theater, a place that at the time had seen considerably better days.

Now we’re used to The Avenue being one of our city’s primary Restaurant Rows, with a variety of quick-casual to fancy, down-home to ethnic eateries that range from bourbon to Bakersfield Sound, from bagels to tortillas to pitas to artisanal loaves, and just about everything in-between.

Some might say we’ve gone just about as far as we can go. But no! There’s always room for something new on The Avenue, as entrepreneurs Jackson and Cortney Nave demonstrated June 16 when they opened Eggs Over Franfkort, their new diner-style breakfast and lunch shop, and found a reported 150 hungry supplicants lined up outside.

What’s the deal? There’s been no shortage of breakfast on The Avenue. Blue Dog and Nancy’s Bagel Grounds, Heine Brothers, Vint and Caffe Classico all offer artisanal coffee and goodies to go with it.

But Eggs Over Frankfort brings an appealing twist: it offers us the best of the Northeastern “diner” tradition – hearty, simple breakfast fare, hot from the grill – without making us suffer the less appealing aspects of this regional form, such as greasy food and surly waitstaff.

In fact, Eggs Over Frankfort doesn’t fry much, which might sound like a bad thing until you belly up to a hearty, affordable breakfast and realize you don’t miss the grease at all.

The Naves bring serious restaurant experience, both having worked, among other places, at the St. Matthews Mellow Mushroom. Their experience shows in the bright and attractive redo of the former Fat Jimmy’s Pizza space and in the clear, professional-looking laminated menus.

Both breakfast and lunch dishes are available all day (7:30 a.m.-2 p.m. weekdays and until 3 p.m. Saturdays and Sundays). It all tops out at $10 (for the “everything” breakfast or a breakfast burger). Lunch sandwiches are $7 to $9 and meal-size salads are $9 or $9.50. The menu makes no claims as to locavore or organic sourcing that might seem to fit the Frankfort Avenue scene, but everything we had during breakfast and lunch visits was served hot and carefully prepared.

“Eggs in a Hole” ($6) consisted of fresh hen-fruit neatly placed into round holes carved in thick-sliced sourdough, then grilled until the toast was golden and the egg cooked to your liking. (I like it over easy so the hot yolk becomes “gravy” for the toast.) It comes with your choice of bacon, sausage or other side. I spotted thin-sliced crisp hash browns going by on another party’s plate and said “Gimme that!” And yummy cheese grits, too. It was a filling meal.

On “the Classic” breakfast, two eggs over easy added traditional sides of bacon, sausage and a tall, tasty squarish biscuit. A request for butter brought some kind of “morning spread” – not the real thing, but hey.

Service slowed during a crowded lunch visit, but an Avenue burger ($9, served well-done without asking, probably a prudent call for non-local meat) and a white bean and avocado wrap on honey-wheat tortilla ($7) passed muster.

Both meals rang up around $20-ish for two, including well deserved 20 percent tips.