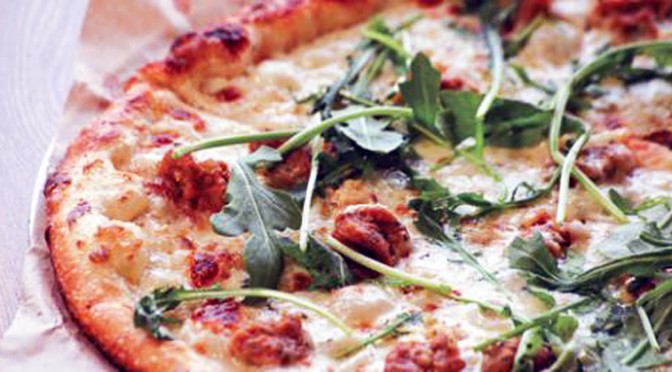 There. I said it, and I’m not even sorry.

I used to be an anti-snob, as I still tend to be about wine, and jewelry, and cars, and a lot of other earthly possessions some people acquire to support their sense of identity and purpose. I don’t drive a Beemer or Lexus, I don’t wear a Rolex, I don’t drink Dom Perignon.

But where I once laughed at refugee friends from the Northeastern metropoli who would bang on about bloated, overloaded Louisville-style pizza resembling giant disks of cheesy casserole, I have slithered over to the side of darkness. A few years of living in New York City and a regular practice of food and wine trips to Italy will do that, I guess.

But I do try not to be a fundamentalist about it. After all, just about any pizza is better than no pizza at all. I’ll try any pizza once, and if it’s local, I may even give it a second chance.

So say hello to Blaze Pizza, which opened the week before last in St. Matthews Plaza (neighbor to Trader Joe’s and Penzey’s) amid considerable publicity and hordes lured by an honest offer of free pizza all day.

Blaze is a chain, but the Pasadena, Calif.-based outfit claims a strong Louisville tie with onetime U of L and NBA hoops star Ulysses “Junior” Bridgeman and James and Jim Patterson among others at the wheel of the regional franchise. It’s coming on fast, too, having only 10 properties across the nation last year but aiming to add 45 more in 2014 in pursuit of a 230-unit spread, according to trade publication Franchise Chatter.

And let’s face it, it’s a pretty good pie: cracker-crisp and sweetly charry, so paper-thin that a whole personal pie packs only 384 crust calories. With a production line based on custom-built product made while you watch and slapped into a blazing hot “Fast Fire’d” oven (no charge for the extra apostrophe), they can have your pizza sizzling in front of you in three minutes or so.

Yep, pretty good pie, if neither New York nor Neapolitan. I’m going to have to award their marketing folks a few extra Pinocchios, though. In the breathless marketing that preceded their arrival, they implied that nobody had ever come up with this idea of building and firing a pizza in quick-service custom style (think Quizno’s, Taco Punk or Chipotle) before.

Ding ding ding! They didn’t have to look any further than Uncle Maddio’s on Bardstown Road to recognize that this concept has actually been around for a while. In fact, so many fast-food operations are moving over to the Chipotle-style format that it is probably trending on Twitter.

During the last few years, a band of start-ups has been racing to become what some have called “the Chipotle of pizza,” reported Market Watch.

More than a dozen pizza corporations are taking a whack at it, Franchise Chatter said, adding, “All of the major players share practically the same model, bringing the personal pizza into the age of selfies by preparing it precisely to a person’s own tastes. … Usually, the centerpiece of the restaurant is a very high-temperature oven that can bake the pizzas in two to five minutes.”

Sure sounds a lot like Blaze to me. And Uncle Maddio’s and – if anyone is counting – 800 Degrees, MOD, Pie Five, Pieology, Pizza Rev, Project Pie, Top That, and Your Pie. “It’s almost a pizza war,” said industry analyst Andy Brennan. I’ll bet we see some of those chains in this pizza-crazy town before the cheese melts, too.

But we’re here to talk about Blaze Pizza, and I’ll sum it up simply: If you like pizza and a quick lunch for $10 or less, don’t be a pizza snob. Head out to St. Matthews and give it a try. Just try not to be creeped out by the hospital look that attends the entire crew wearing pale blue plastic gloves.

The menu is pretty basic. Pizzas are all one dinner-plate size. But you can still put together thousands of combinations from six meats, five cheeses, 16 veggies (or 15 veggies plus a fruit if you want to be a pedant about the pineapple) and six sauces. Prices are simple: $5 for simple cheese-and-sauce, $6.25 for one topping, and $7.95 for all other pizzas with all the toppings you like.

A half-dozen salads come pre-built in plastic boxes from $3.85 to $6.85. All packaging is recyclable, compostable and made from recycled materials, and that sounds a bit like Chipotle, too.

A “White Top” pizza topped with mozz and ricotta, plenty of garlic and fresh arugula, and mild Italian sausage in place of the standard bacon, was very good, and an “Art Lovers” pie with canned artichoke hearts, mozz, garlic and “dollops” of thick red sauce passed muster, too. Packaged Caesar ($3.85) and beet-and-goat-cheese ($3.85) salads were a cut above fast-food quality.

Lunch for two was $26.24 (the healthy salads kicked up the toll a few bucks). There didn’t seem to be any opportunity for tipping.