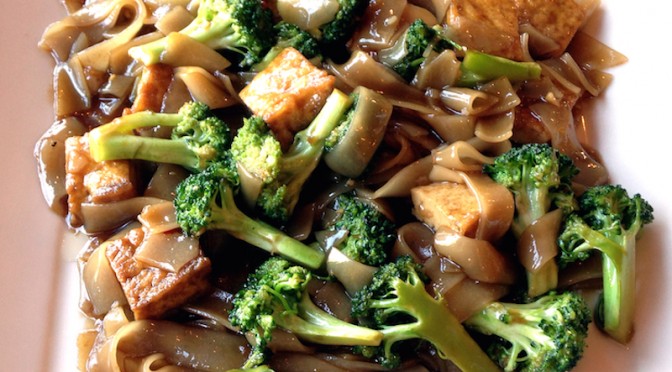 Well, hey now. What’s this? A new restaurant reviewer at The Courier-Journal? How about that! This sort of thing fascinates me because I used to occupy that pulpit myself, as dining critic for the late, great Louisville Times (and, after its death, The CJ) until I left the building in 1990.

“Consummate skill”? Whoa! Really? Let’s look that one up in Webster’s: “Carried to the utmost extent or degree; of the highest quality; complete; perfect.” This is high praise indeed, although it leaves unclear how a “perfect” eatery didn’t quite merit that coveted fourth star.

Once I had seen that word “consummate,” I couldn’t un-see it. I’ve been a fan of this little Holiday Manor eatery since it opened in 1994. I’m fond of it, with its friendly owners Chavantee and Billy Snow, as a comfortable, casual, neighborhood place. But I couldn’t fairly rank it in the city’s top tier.

I was in the mood for Thai anyway, and I hadn’t reviewed the Cafe for years. Why not follow in Ms. Miller’s tracks and see whether I thought it was “consummate,” too?

We headed right over and were a bit surprised to find that it wasn’t very crowded on the day of the review. We took advantage of the space, settling in to a comfy booth by the windows, where a welcoming server (Mr. Snow, perhaps?) was on the spot to give us our menus and take drink orders. (Crisp, golden Singha Thai beer for $3.75? Don’t mind if I do!).

We settled in with Chef Chavantee Snow’s extensive menu, which contains about six dozen items, most main dishes in the $11 to $16 range. I sneaked a few peeks around, curious about Ms. Miller’s observation that the decor could use some updating. Personally, I thought the colors were homey and fun, and I particularly liked the life-size Buddha statue in a corner.

So, how’s the food? I’d say it ranged from pretty good to really good, and that’s about what I want of a cozy ethnic spot.

Papaya salad ($8.95) was fresh but uninspired: Julienned ripe papaya was piled atop iceberg lettuce and tomato, sprinkled with chopped peanuts and dressed with a mild vinaigrette.

Laab moo ($8.95), Thai spicy pork salad, resembled the papaya salad with shredded pork substituted for the papaya, and thick-sliced cucumbers added. It was mild, too.

Summer rolls ($5.95) hit the spot. A mix of crisp and tender textures and fresh summer flavors, shredded carrots, lettuce, cucumber and tofu were tightly wrapped in translucent rice paper and served with a spicy-soy dipping sauce.

I asked for level three heat (out of four) for my Pad Se-lew Pag ($10.95) but was served zero-level heat. But they turned my frown upside down with a quick response, two dishes of hot stuff, one bright-red Sriracha “rooster sauce” or the equivalent, the other a house-made green-flecked clear fluid of fire. This kicked up the tasty stir-fry of broccoli, tofu and black beans over tender rice noodles and made me happy.