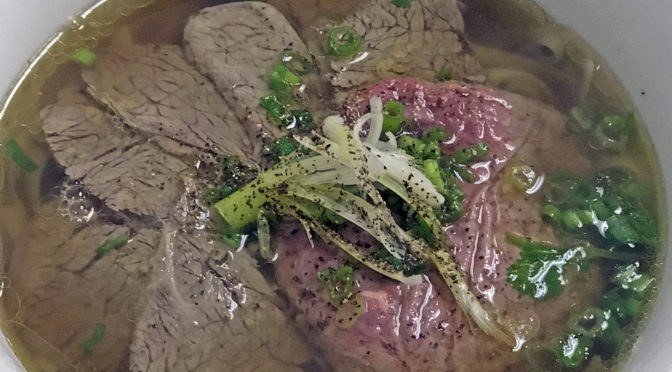 I’m afraid LEO Weekly’s Taste Bud writer, Kevin Gibson, who wrote fondly of Sam’s Hot Dog stand on Lower Brownsboro in 2015, is going to be sorry to learn that Sam’s has gone away. I expect his regret will be tempered, though, as it is for us all, by the recent arrival of Ngon Appétit, successor to the late and lamented Four Sisters, serving up Vietnamese-French crêpes, banh mi, and a worthy pho.

Pho and ramen are getting to be as common as chili over spaghetti in Louisville these days, and Ngon Appétit’s take on beef pho ($9.95), pictured above, is a contender. It was built on an indulgently rich beef broth that simmers for 10 hours, filled with long, soft flat rice noodles and topped with a prettily arranged circle of rare-pink beef rounds arranged in a flower pattern, with a pile of chopped green onion in one corner. We would have liked a little more cilantro than the random leaf, but that’s picky. The beef was flavorful, with a tender, textured mouthfeel from being pounded thin.

A cup of Vietnamese yellow curry ($3.95) was also a hit, a thick, curry-scented broth filled with tender, long-simmered vegetables: Rounds of yam, chunks of potato, and a few tiny, pear-shaped eggplants the size of grapes. The menu declared it vegan, though it was so rich it could have fooled me.

A well-made goat-cheese and scrambled-egg crêpe ($8.95) folded into a hexagon and discreetly drizzled with balsamic, was large enough to fill a dinner plate; it made a meal in itself.

With a cup of strong Vietnamese iced coffee, a delicious lunch for two was $28.41, plus a $7 tip.