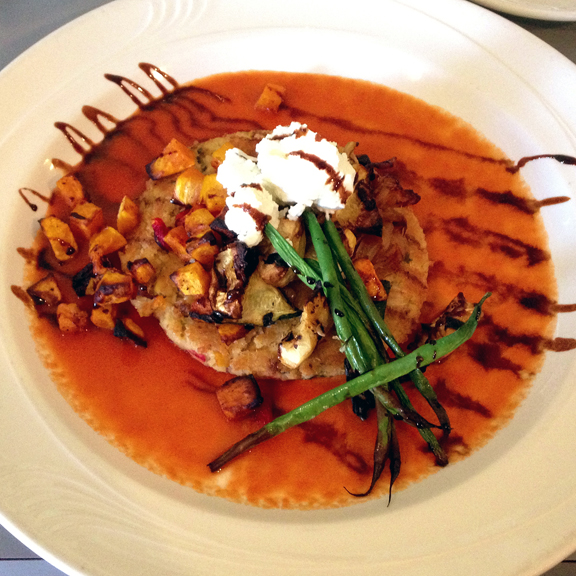 North End Cafe has just about become a Louisville institution, and it didn’t take all that long to do so. Co-owner and Chef Christopher Seckman celebrated the 10th anniversary of the original North End Cafe on lower Frankfort Avenue last spring – it’s a place of enduring popularity. Now the second North End Cafe, located at the Douglass Loop in the former Club Grotto location, appears to be going strong after a year and a half.

Personally, I’ve never quite figured out the “North End” meme, since the map of the Louisville metropolitan area seems to place Southern Indiana in that geographical zone.

No matter, though, I’ve liked the Frankfort Avenue branch since its first incarnation, when it felt like a breakfast-and-lunch place at the outset; and I came to like it even more when it doubled into the shotgun house next door and staked a sturdy claim on evening bistro status – with tapas – as well.

Now both locations rank as worthy options for evening dining, without sacrificing one bit of that comfortable, inviting mood that elevates the option of breakfast-for-lunch, breakfast-for-dinner or breakfast-as-bedtime snack.

We had been by for brunch (of course) a while back, not long after North End Cafe had settled in to its present location the winter before last. But an afternoon movie date at Baxter Avenue Theaters (hello, Blue Jasmine!) prompted an early dinner drop-in to see how the place was doing during the dinner hour.

Water came promptly, with recycled wine bottles allowing table refills; so did a basket of crusty Blue Dog bread with diner-style single-serving whipped-butter packets. Our adult beverages – house Pinot Grigio and a glass of Bell’s Oberon beer on tap ($3) – came almost as fast, and all was well.

The menu boasts “healthy, wholesome food. We’re keeping it simple,” and that seems fair enough, with a goodly share of vegetarian and vegan options listed. A dozen salads and an equal number of sandwiches are mostly under $10; a dozen small-plates tapas are $10 or less, and about 15 main-dish entrees are $10.50 (for chicken and dumplings) to $24 (for the high-end choice, diver scallops and grits); all the rest are under $20.

Breakfast is available at all hours, of course, short-order standards with gourmet touches, mostly under $10.

The meatless chickpea and quinoa cake ($16.50) was a fascinating meat-free main, a pancake-size round of the pureed legume and the grain, decked out with a smoky, savory mix of grilled veggies and mild goat cheese, attractively plated on a sweet red-pepper coulis.

We didn’t have room for dessert, but decadent slices of peanut-butter cheesecake and deep chocolate torte were too tempting to resist. ‘Nuff said. Our share of dinner for two came to a very reasonable $41.41; swift, friendly yet unobtrusive service earned a $10 tip.