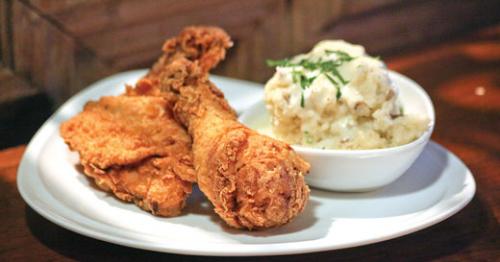 When Village Anchor Pub & Roost and its companion watering hole, The Sea Hag, opened three years ago this past summer, I thought they were pretty cool. But I wondered if they would stick.

They were bright, bold and edgy, featuring perhaps the city’s best semi al fresco patio in the Anchor’s Lanai and the kind of decor touches – Old Masters in rococo frames mounted on the ceiling! – that you’d expect a proprietor like Kevin Grainger, creator of “Got Milk” and the Nike “Swoosh” – to come up with.

They were capitalized, too, by “Papa” John Schnatter, who wrote the big checks required to dismantle, move and renovate the old Anchorage train station to a nearby hilltop to house the venture. This was a deal we assume Papa could arrange with the stroke of a gold Montblanc pen.

All this in the center of upper-crust Anchorage, a community known for shady lanes, expansive Victorian-era mansions, and post-card-worthy old village churches? Oh, yeah, and its own school system, independent of the metro public schools.

Was there any chance that a good-size bar and wacky gastropub-style eatery (along with the similarly appealing attractions of Anchorage Cafe in the same development) could fit in long-term to the buttoned-up environment of wealthy, conservative Anchorage?

I’m happy to report that my first return trip to the Pub & Roost after my initial visits in the summer of ‘10 found the place thriving, with plenty of local citizens relaxed, casual and apparently having a good time. The kitchen staff has remained stable, a good thing, with Executive Chef Geoff Heyde and Executive Sous Chef Oscar Maldonado still on board, joined by Sous Chef Patrick Gosden.

The outfit’s Facebook page defines it now as “a lively Parisian Bistro greets the more traditional English Pub,” which sounds interesting, although I don’t see a whole lot of Paris here. Not that there’s anything wrong with that, since I do see plenty of the kind of old-fashioned Kentucky cookery that some call “Southern,” leavened, as it should be, with international touches from all over the world. Including, well, French fries.

The bill of fare isn’t high-end, but perhaps as befits its outer East End location, it isn’t cheap, with about nearly two dozen starters, light plates, soups and salads starting just under $10, and many of them well into double-digits, topping out at $16 for sweet chili coconut shrimp and $18 for tuna tartare.

About 16 main course selections start in the low to middle teens (blackened fish tacos, $12; a meat loaf burger, $14, and fish and chips, $16), but quickly rise through the $20 range to a couple high-end seafood items on the “Captain’s Log” menu like cast-iron scallops ($34) and the memorable pistachio-encrusted sea bass ($38). The lunch menu knocks the price point down a notch, and the brunch selection is memorable. (It’s an expansive menu, not a buffet, 10:30 a.m.-3 p.m. Sundays.)

One will have no difficulty getting an adult beverage here, as the Pub & Roost boasts its own bar and they’ll gladly run other items up from the Sea Hag for you. The wine and beer lists are well chosen, and the bourbon list (including “tasting flights”) is memorable.

We took my visiting brother and sister out to dinner and found the lanai remarkably comfortable, thanks to big fans and shade, on an otherwise torrid summer afternoon. The food, too, consistently measured up, starting with a couple shared apps.

The deviled eggs ($7) have been a hit since Day One, prepared three ways and presented on purpose-built white display trays. You get two of each: spicy Buffalo-style topped with candied Anchor Bacon, a preparation so special, apparently, that they’ve trademarked the name; a reddish sun-dried tomato egg studded with bits of goat cheese; and a subtle wild-mushroom model scented with funky truffle oil.

A two-beet salad ($14) featured wedges of red and golden beets, roasted, then quick-pickled, were tender, earthy and sweet. They were tosed with Capriole goat cheese, candied walnuts, grape tomatoes, onions and standard-issue field lettuce mix in a tart-sweet, creamy mustard-sherry vinaigrette. It was a good salad, but heavy enough to make more than just a starter.

The Hotter Brown ($15) came baked and broiled in an oval plate. It was pretty much the standard Louisville dish featuring pulled chicken, a Cheddar-Parmesan Mornay, that trademarked bacon and grape tomatoes on top.

Two pieces of Myra’s fried chicken ($17), juicy, tender and crisp, should put all thoughts of the Colonel’s industrial alternative out of your head forever. Garlicky mashed potatoes and gravy made it just like Mom’s.

No room for dessert. None. Sorry, another time. Dinner for four came to $103.88, plus a 20 percent tip for attentive but not overbearing service.