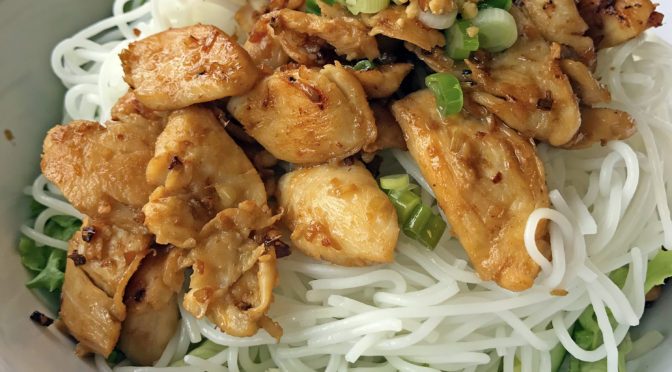 Who doesn’t love street food? I sure do! Give me a corn dog, or maybe a big slice of New York City pizza that I can fold over and carry down the street, and I’m a happy boy.

So naturally I was delighted to discover a recent South End arrival, Á-Châu, which bears the magical words “Vietnamese Street Food” in big letters over the front door.

If you’re visualizing portable Vietnamese food on sticks, though, you may be surprised to learn that big bowls of Asian noodles and even soup qualify as street food, too, even though you can’t easily carry them around. In Vietnam, as in most of Asia, you buy street food from a booth or cart, pull up a table, sit down and enjoy.

Á-Châu, whose name is Vietnamese for “Asia” and pronounced “Ah Chow,” opened last month in the former home of longtime Iroquois landmark Thornberry’s Deli. It’s a bright, simple remake of the beloved deli that used to be famous for its pies. Indeed, this line of succession may stand as metaphor from the South End’s gradual evolution from blue-collar Anglo to one of the city’s most diverse international communities.

The large, square room appears spacious with its bright-yellow walls, white floors and ceilings, with plenty of room for well separated wood-look tables and black dinette chairs, and a serving counter at the rear of the room. The only decor element is one big-screen TV tuned to a Vietnamese satellite channel. The language was a challenge, but the MTV-style music was international and appealing.

The menu features mostly Vietnamese dishes plus a taste of Thai, and it’s easy accessible in both Vietnamese and English. A half-dozen appetizers range in price from $2.50 (for a pair of cha giò, Vietnamese egg rolls) to $9.50 (for bò tái chanh, a spicy salad of lime-marinated spicy sliced beef). Bánh mi, the popular street-food sandwiches built on the fluffy baguette that remained as a Vietnamese favorite after the French colonial empire departed, are $4.

There’s pho, of course, the iconic Vietnamese soup that aficionados are learning to pronounce “phuh,” and a half-dozen other dinner soups ($7.95 to $8.95), and about 18 other main-course vermicelli, rice, curry and other noodle dishes, all clustered in a comfortable price range from $6.95 to $9.95.

No alcohol is served, but if you’re looking for something more interesting than American soft drinks ($1.50), there’s a fascinating variety of non-alcoholic Vietnamese beverages including fresh coconut or sugar cane juice ($2.60 each), an avocado smoothie ($3.50), or the sweet, dairy-laced Thai iced tea ($3) or hot or cold Vietnamese coffee ($2.75). I went with the coffee, which is served in a small metal pot that drips strong, dark brew into a waiting glass containing a ration of sweet, creamy condensed milk. (The coffee, by the way, is Cafe du Monde from New Orleans, a fine thing to find in a Vietnamese eatery.)

A pair of egg rolls got us off to a promising start. They were very well made, with very thin eggroll skins tightly rolled and fried to a crisp, piping-hot, dark-golden shell that was not at all greasy. In contrast with most noodle-and-veggie-stuffed egg rolls, these were almost entirely filled with finely chopped meat, only slightly lightened with a few bean-thread noodles and a little shredded cabbage. They’re served with nuoc cham sauce, a feisty blend of sugar, vinegar, Vietnamese nuoc mam fish sauce and a little hot pepper.

Both our main dishes were fresh, well prepared, and served in abundant portions.