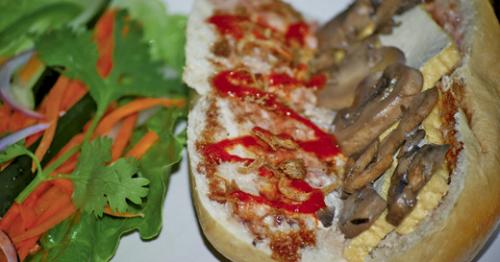 I learned in grade school that America was a melting pot, a vast cultural amalgam made up of gifts from national and ethnic groups around the world, molten into sturdy steel to which every group contributed its special strength and character. I thought that was pretty cool back then, and I still do.

But upon more mature reflection, living and dining in a modern Louisville that’s far more diverse than the white-bread city where I grew up, I think maybe it’s even more accurate to describe us as a cooking pot, into which each generation of new immigrants has added appetizing ingredients to build an amazing national stew.

After all, think back far enough, and there’s not much in our national larder that goes back earlier than the first European invaders. Er, colonialists. The Mexicans gave us tomatoes and chili peppers and other veggie treats. Columbus purportedly found the Arawak Indians roasting meat on a rack of sticks and calling it “barbacoa,” and the French voyageurs were delighted to borrow nutritious, long-keeping pemmican from the Hurons.

But by and large, just about all our culinary treasures were donated by new arrivals, from white bread and pound cake to bratwurst and mettwurst and spaetzele, through pasta and Irish stew and corned beef and moo goo gai pan and bagels and lox to tacos and enchiladas.

Still, the arrival of a new ethnic cuisine is a thing to celebrate, and Louisville has seen plenty of that over the past generation, from the advent of “real” Mexican taquerias, panaderias, rosticerias and more, not to mention a variety of other national cuisines from south of the border. We’ve added Bosnian, Cuban, Ethiopian, Nigerian and Senegalese, Indian and Filipino and Thai, and we’re all the richer for it.

And then there’s Vietnamese. One of the first of the modern cuisines, this Southeast Asian delight came with the first refugee arrivals in the ’70s, after the nation’s sorry adventure in Vietnam. Huong “Coco” Tran’s Egg Roll Machine, which grew into Café Mimosa, arrived some 30 years ago. Vietnam Kitchen has been with us almost as long, with Annie Café not far behind it.

Now Vietnamese spots add value to many city neighborhoods, and we’re glad. The latest, Four Sisters, opened two months ago today in the vacant quarters that had housed the short-lived but memorable Zen Tea House.

Four Sisters is already packing in crowds with its happy combination of good, simple fare, affordably priced, presented by the four smiling Vietnamese-American sisters who give the spot its name.

We dropped in for dinner the other night and left full, happy and a bit bemused by the Vietnamese-American culinary melting-pottiness in the sandwiches, which are built not on traditional banh mi bread (French-style mini-baguettes bequeathed to Vietnam by the French colonial empire), but on good old American hoagie buns.

Not only that, but they were out of white buns, so they offered ours on whole wheat, which struck me as a mighty odd base for a Vietnamese sandwich. Surprise! Although the hoagie lacked the shattery crust and light texture of a serious baguette, it made a fair alternative in its own right, light with a gently crisp golden-brown crust and toothsome pale-tan interior.

Four Sisters’ menu keeps things simple with a menu limited to six savory crêpes and four banh mi, all priced from $5.50 to $8.50, and 11 sweet crêpes from $3.50 to $6.75. Add espresso drinks, coffees, teas, smoothies and such, and you’re still talking about a dinner that won’t set you back a lot more than, say, a big sundae at the nearby Comfy Cow, which, of course, is also a nice thing to do.

A savory avocado, mushroom, fresh spinach and crumbled feta cheese crêpe ($8.50) struck me as another East-West combo, but it worked, all the veggie goodies stuffed inside a paper-thin, eggy crepe shell served with four sides turned over to make an open-face square. One of the four sisters dropped by. “Want some Sriracha sauce?” Don’t mind if I do!

A veggie banh mi ($6.50) resembled the pork model but summoned what appeared to be marinated and pressed tofu strips, thick-sliced sauteed mushrooms and chunks of buttery avocado in place of the pig meat, plus a veggie-based paté. The joy of banh mi resides in its appetizing mix of unexpected contrasts in color, texture and flavor, and both banh mi here made the grade.

A shared dessert crêpe was filled with a rich, creamy dark-chocolate sauce and slivered almonds, artfully decorated with chocolate stripes and decadently finished with a mound of whipped cream.

A filling dinner for two was $28.62, a fair toll for a night out on the town on Frankfort Avenue.