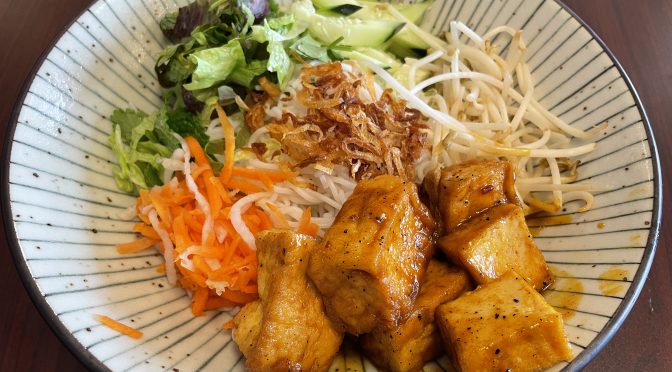 Now let’s warm up to Vietnam’s other iconic dish, bún, which rhymes with “boon.” Want to get to know bún? You can’t go wrong by trekking out to the metro’s newest Vietnamese eatery, Vin Bun in Middletown, where the name of the dish is part of the restaurant’s moniker!

Bún (pronounced like boon) means noodles, typically thin rice vermicelli noodles; and much like pho, it comes in all sorts of versions based on the primary ingredient that accompanies the noodles. Bún bo, for instance, is spicy beef noodle soup. Bún cha? That’s pork meatballs and noodles. And so it goes, right on through the Vietnamese menu to bún mam, which is fermented fish noodle soup, if you dare.

Vin Bun Vietnamese Bistro is just about a month old, so it still has that new-restaurant shine. It’s located in the same short strip of storefronts in Middletown that houses Hyderabad House Indian, which I reviewed recently.
?Vin Bun is a bright, cheerful place, a long, narrow room with colorful murals along both walls. There’s room for maybe 40 diners, and just about every seat was taken on a recent Saturday at midday. With just two servers that I could see, service stuttered a bit at times, but they were helpful and as friendly as it’s possible to be when one is on the run.

The menu is relatively short compared with some of the region’s long-standing Vietnamese spots, but that’s a wise move when a new eatery is ramping up the kitchen.

Bun might be the restaurant’s name, but there’s more: In addition to the five bun dishes there are four phos, three rice dishes, four banh mi sandwiches, and about eight appetizers. Prices range from $7 to $9 for the apps and sandwiches, and $13 to $19 for the entrees. Non-alcoholic beverages include teas and a few more unusual Vietnamese drinks such as nuoc mo apricot-ade and avocado smoothies. There’s also a short list of domestic and mass-market Asian beers.

An appetizer order of salt and pepper tofu ($7) revealed that there is a master of tofu – and, perhaps, a master of frying – in Vin Bun’s kitchen. A half-dozen three-bite-size blocks of tofu, fried a beautiful light gold, came on a pretty blue plate with a mini-salad of quick-pickled, shredded carrot and radish garnish and a cilantro leaf alongside. It looked good and tasted good enough to turn tofu haters into fans. Creamy soft tofu, steaming hot, was encased in a paper-thin, deliciously crunchy crust seasoned with just the right amount of salt and pepper.

The chef’s hand at tofu prompted me to order more of it in my bún choice: Bún tofu ($13), pictured at the top of the page. A large blue-and-white stoneware bowl was loaded with attractively arranged ingredients that invite one to admire the colors and textures before mixing it all together and digging in: Six or eight blocks of golden-fried tofu lightly coated with a reddish sauce and lightly dotted with spices; crisp bean sprouts; slivered cucumber; crisp lettuce mix; more of that quick-pickled carrot mix, and, on top, a pile of crisp fried onion slivers. All this perched atop a bed of thin rice noodles and, at the bottom, a delicious, savory sauce full of taste-tempting umami flavors. I mixed it up, attacked it with chopsticks, and enjoyed every bite.

Of course we had to try the pho too, and beef pho ($15), seemed the obvious choice. Like all our other dishes, it came in an attractive, artistic bowl – this one of pebbled gray metal – and was filled up with what the menu describes as “a rich 24-hour simmered beef bones broth.”

You order basic beef pho, then add your choice of meat: beef slices, brisket, beef tripe, or meatballs. We asked for brisket and weren’t sorry. The beef broth was beefy and good, but was perhaps a bit less multi-dimensional than the best pho I’ve had, lacking for example the subtle star-anise scent that’s an inviting aspect of pho broth. That’s a minor nit to pick though. A pile of vermicelli noodles was submerged in the broth, along with very thin slices of steak and more of brisket, cut across the grain with a fat layer along the side. The brisket was delicious, very beefy, almost like beef tongue, and there was plenty of it

It came with the traditional pho side dish: bean sprouts, Thai basil, cilantro, fresh jalapeño and a lime wedge. Adding them in boosted the broth flavor

Noise Level: Most of the restaurant’s 40 or so seats were filled, but voices weren’t raised, and the background music by French-born pianist and composer Riopy was soft and meditative. Sound levels stayed in the 70-75dB range, the level of normal conversation.

Accessibility: The restaurant and restrooms appear to be accessible to wheelchair users.