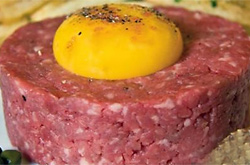 The economy is still pretty much in the tank, local unemployment is soaring, and gasoline prices are crawling upward again. Who can afford fine dining?

Faced with this fiscal reality, a number of Louisville’s more upscale establishments have undertaken menu resets, seeking to meet a shaky market with quality cuisine that doesn’t take quite such a bite out of consumers’ flattened wallets.

Over at classy Equus, for instance, the fine-dining restaurant and its adjacent partner, Jack’s Lounge, now share a single menu, including a good choice of small bites under $10 and a main-course list that ranges from the teens into the high $20s. It’s hardly diner-style pricing, but it moves Equus from the special-occasion category into a fair choice for the impulsive diner.

We’ve seen a similar trajectory at Le Relais, which I’ve always rated among the city’s five top restaurants, and, on any given day, its best. Over the past year, without sacrificing a bit of its first-class service or art-deco look, it has subtly shifted from high-end modern French grand dining to something more in the bistro style.

I rendered a quick report when this shift began last winter (LEO Weekly, Feb. 4, 2009), and had been looking forward to going back for a more comprehensive dinner. Opportunity struck the other day when our friend Lucinda, one of the most adventurous diners I know, called and uttered two words: “steak tartare.”

Raw beef? Tell me more. “It’s special on Thursday’s at Le Relais,” she said. “I want it. And maybe some escargots, too.”

Sounded good. She made reservations and we headed for Bowman Field, where Le Relais has made its home in the airport’s historic terminal for more than 25 years. Its intimate, 1920s art-deco ambiance, with plush banquettes, burled-wood walls and white-draped tables, invariably reminds me of the café in the classic film “Casablanca.” (Weather permitting, the deck out back offers intriguing views of small aircraft taking off and landing. With just a little imagination, you’re viewing the scene exactly as Charles Lindbergh saw it when he landed The Spirit of St. Louis here on a visit in 1927.)

The bistro menu offers a dozen appetizers – er, make that “hors d’oeuvres, soupes et salades” – with just about everything under $10 except the Dungeness crab cake with remoulade sauce ($13). Main courses (“Plats Principaux”) begin at $19 (for a crêpe aux morilles, a crepe stuffed with asparagus and morel mushrooms; or linguini with shrimp, asparagus and peas) and top out at $27 (for cotelettes d’agneau – grilled lamb chops – or steak et pommes frites, with the original “French” fries).

Daily specials on weekdays offer memorable bistro fare at the lower end of the menu price range: pork Milanese and spring greens ($19) on Tuesday, duck confit and Brussels sprouts ($19) on Wednesday, the aforementioned steak tartare and pommes frites ($19) on Friday, and cabillaud en papillote ($19) as fish on Friday.

If you want a veggie dish more substantive than the plate garnish, petits plats (small plates) of fries, scalloped potatoes, green beans (“haricots verts”), a vegetable gratin or asparagus are $5 each.

Choosing was easy: “I’m getting my steak tartare!,” announced Lucinda. “And escargots!” I had my eyes on a classic bistro dish, steak and pommes frites; and my wife Mary went light and put together appetizers to make a meal.

The fact is, this was sharing a meal among friends, and we all eagerly attacked each other’s plates with mutual permission, taking care only to hog our share. That’s bistro-style, family-style dining, and it’s much more fun than a stuffy setting where one must use the proper silverware item and never so much as look at your companions’ plates.

So we placed our orders for food and wine – taking advantage of Le Relais’s short but decent selection of 375 ml. “half-bottles” so we could have both a red and a white on the table with two glasses each – and the delights started coming to our table.

The escargots de Bourgogne ($9), which sounds so much more appetizing than “snails,” were tender, slightly chewy bites of mollusk, each in its own cavity in a round, white earthenware traditional snail dish. Although these goodies are more than just a vehicle for garlic and butter, the abundant garlicky juice was, in fact, perfect for dipping slices of Blue Dog baguette. Attentive service was quick to bring more bread when they saw we were eating it all up.

I was intrigued by a seviche appetizer special ($12), finding this Latino coastal dish an unexpected option in the city’s top French restaurant. It was a well-executed version, too, although with the escargot as competition on the table, it became a bit of an afterthought.

The first of Mary’s appetizers, Vichyssoise de petit pois (cold leek and potato soup with peas, $5) was ice-cold, rustic, with good potato and leek flavors and a more herbal hint from the peas, perhaps, with a distinctly tart edge of something like vinegar. It was good and refreshing on a summery evening, albeit a rather offbeat version of the French classic.

Her main-course app, paté du chef ($9.50 market price), was a neat rectangle of coarse-grained, intensely flavored paté, a whiff of something like allspice or clove playing counterpoint to its meaty goodness. It was plated with whole-grain mustard, cornichons, melba toast and paper-thin sliced onions pickled with juniper berries.

My steak and pomme frites ($27), a 12-ounce New York strip, was ordered medium rare but came out well past medium, just barely pink. Send it back? They can’t uncook it, and it wasn’t worth wasting a perfectly good steak, so I shut up and enjoyed it anyway. The frites were crisp, hot and grease-free.

The steak tartare ($21) was a generous, neatly formed mound of deep-red, finely chopped quality beef with a raw egg yolk sitting unbroken on top. Distinctly not a dish for the wary, but none of us is wary.

Lucinda pondered this scene of raw, uncooked deliciousness. “How do they …” she paused, thinking, gently working the egg yolk into the meat with a fork. “You must be terribly careful to keep it fresh. It makes me terribly nervous,” she said, taking on a good-size forkful with a happy smile.

Sensuous. The dictionary defines it as “perceived by or affecting the senses,” but the implication is deeper. Looking for a picture? Try most any dish at Le Relais. Start with the steak tartare.

We hardly needed dessert, but Mary made up for her self-denial on the savories with a chocolate soufflé ($10.50). Feather-light, it showed more of a subtle cocoa flavor than deep, dark chocolate, neatly balanced with a rich crème anglaise.

Lucinda and I were going to pass, but the light, cooling beauty of a shared dish of house-made sorbet ($6.50) put that plan to rest.