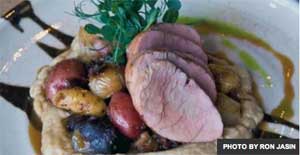 We found a parking place right in front of Wiltshire on Market on a freezing Thursday evening, negotiated rock-hard ridges of icy snow and made it to the front door still standing. As soon as we stepped inside, a welcoming warmth enveloped us and drove away the cold.

Soon the three of us were ensconced on a soft, tall banquette seat at an oddly shaped, not quite triangular table big enough for six or seven. We adjusted puffy pillows behind our backs and felt quite sybaritic indeed.

Then I picked up my menu and squinted. I turned it a little, trying to catch the light from a cloth-covered fixture overhead. I turned to Lucinda. “Can you see it? It’s dim in here.” She snarked back: “It’s our eyes. We’re old.” I denied this while Mary snickered, but I noticed she was squinting, too.

Even the dimly lit environment comes across as cozy, not depressing. I just wish it were a little easier for these aging Baby Boomer eyes to see the menu and what’s on my plate. But if darkness is the only ding on a memorable dining experience, my rating remains well into the 90-point range, four stars by any definition. Put it all together, and this no-longer-so-new arrival ranks in my top tier of Louisville eateries.

As noted, Chef Ming’s menu changes weekly, particularly the main courses, but you can count on appetizers ranging from $4 (for an assortment of marinated olives) to $16 (for a variety of wooden boards loaded with cheeses, charcuterie — that’s salami and sausage — or both). First courses are typically $6 or $7 (for an intriguing set of soups, salads and lighter goodies including a weekly variation on flatbread pizza).

Four main courses are typically priced from $16 to $18 and come on plates that are reasonably sized and great for sharing. There are generally a couple of meat dishes, a fish option and a vegetarian choice. Perhaps the best way to illustrate it would be to tell you about our dishes. Come down next weekend (they’re open only Thursday, Friday and Saturday evenings), and you’ll find something similar, but different.

The three of us love to share our dinners, and Wiltshire’s small-plates approach made it simple: Rather than each getting a dish and passing around bites, we put two appetizers, then three dinner plates, in the middle of the table and dived in, using our bread plates for dining.

Our first app was Niçoise olive tapenade ($5), a Provencal classic with a twist: It was scented with orange peel, a fruity-earthy combination of flavors that shocked our palates, then pleased them, and that went well with our wine of the evening, a 2008 Gianfranco Alessandria Dolcetto d’Alba from northwestern Italy ($36). It came with crisp, savory semolina black-pepper crackers.

A charcuterie sampler ($9) came with three kinds of salami — beef bresaola, capicola and salami with house-made mustard, cornichons, spicy roasted plum tomatoes and heart of palm. A basket of crusty artisanal bread disappeared quickly. Three entrée plates nicely filled the table and the three of us.

A chunk of pork tenderloin ($18) lived up to its name, gently smoked and fork-tender, cut into a half-dozen thin slices arrayed atop a pool of subtly flavored pear-fennel puree with bits of pork belly and pearl onions, and lightly sauced with a sweet-fruity bourbon-cider “jus.”

We took three spoons to one dessert, a remarkable vertical architectural construction of chocolate ganache with a cap of mousse, given an exotic and mildly spicy flair with red Mexican guajillo chili peppers.

We ended up at a reasonable $108 for three, including a decent bottle of wine, plus a $25 tip for unfailingly pleasant and knowledgeable service.

If you go, remember that Wiltshire on Market is open only Thursday, Friday and Saturday nights starting at 5 p.m., and reservations are a good idea. Reservations are taken by voicemail at the number on the previous page, or you can call Wiltshire Pantry on weekdays at 581-8560.