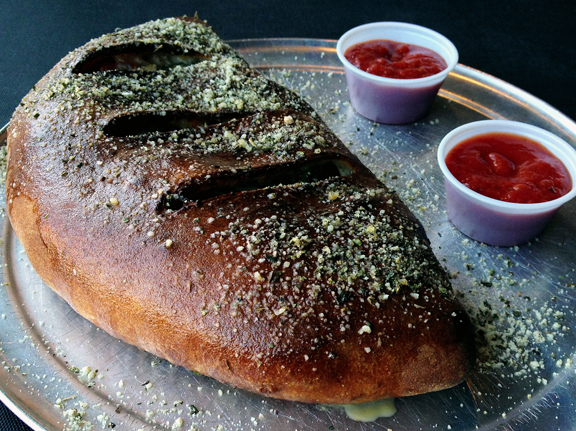 When DiOrio’s pizza first settled into the former home of Karem’s Meats in St. Matthews, it already seemed that this booming nightspot zone was attracting more pizzerias than it could reasonably handle … and that was before Coal’s or Mellow Mushroom came to town.

Still, even if the pizza competition hereabouts looks mighty keen, there have been few casualties among the suburban village’s purveyors of pie. Yes, Naked Pizza went down fast, but while its gluten-free, naturally healthy pizza concept might have appealed to the health-conscious, they apparently missed a simple point that DiOrio’s and most of its competitors clearly get:

Pizza is even better than White Castle as a restorative repast when you’re prowling the city’s lightspot strips. This is no place for healthy fare. When you’re out on the town, you want something that’s filling, fatty, hot, salty and crunchy. Pizza does the trick!

Clearly in tune with this concept, DiOrio’s keeps its kitchen and bar open until 4 a.m. Fridays and Saturdays, midnight every other day of the week. Big-screen plasma TVs tuned to sports plus organized fun like Thursday Trivia Night and Wednesday Texas Hold ’em keep the crowds entertained. As, of course, does the hot, cheesy pizza and other Italian-American goodies.

It’s not all about late-night food and fun: DiOrio’s also serves lunch seven days a week, with an affordable midday bill of fare for working stiffs, with everything from baked lasagne or a large salad with chicken to a half-sub, fried ravioli and meatballs (just like St. Louis!) or a 10-inch pie priced at a thrifty $7.99.

Pizza is DiOrio’s middle name, and it’s done the old-fashioned way, slow-proofed, rolled by hand and tossed overhead in the style of the old-time pizza guys in Gotham.

It’s no surprise, then, that pizza takes up about one-third of the six-page menu. You can acquire an oversize slice (one-sixth of a 20-inch pie) for $3.50 with cheese plus 50 cents for each topping you choose), or build your own full-size pie with a slew of ingredients that may total out anywhere from $7.99 (for a 10-inch cheese pie) to $75 for “The Massive Gibbon,” a 30-inch pie topped with pepperoni, Italian sausage, spicy sausage, ham, meatballs, bacon, chicken and salami, enough to serve 10 to 15 people.

If you prefer to have DiOrio’s chefs do the choosing, 10 specialty pies include traditional goodies like the tomato, mozzarella and basil Margherita or Stephanie’s White Pizza, or not-so-traditional innovations such as Caroline’s Sweet BBQ Chicken pizza or D’s Philly Cheese pie (all $13.99 to $45.99 depending on size).

I had been in for pizza not long after DiOrio’s opened (Voice-Tribune, Dec. 9, 2010), and was pleased with their thin-crusted, crisp pies and thick, zesty tomato sauce. On a recent return visit, we ventured to the non-pizza side of the menu for a DiHogio Italian-style hoagie ($8.50), four hefty lengths of crusty hoagie bun loaded with salami, pepperoni and ham layered with Provolone, lettuce and tomato and a dab of herby Italian dressing.

A DiOrio’s special calzone (#10.99) was as big as a shovel blade. Basically a 10-inch spinach, mushroom, tomato and mozz’ pizza rolled into a turnover and baked dark golden brown, it made a hearty lunch. No, two hearty lunches, reheated as leftovers the next day.