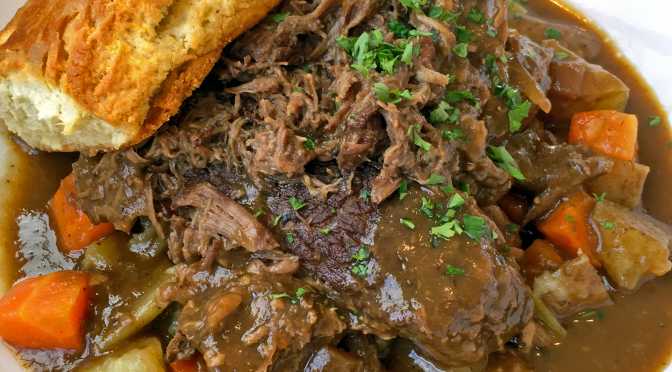 In case you hadn’t noticed, summer has clamped down on us fully now. It’s 95 outside as I write this, and the central air is struggling. The humidity? Don’t even ask. It’s as if the giant evil spaceship in Independence Day: Resurgence is dropping down over the metro, only it’s a giant sponge dripping hot water.

Yuk. Nothing seems very appetizing when the weather is like this.

Wait! How about a big bowl of good old-fashioned pot roast? Braised long and slow, surrounded with veggies roasted in the same pot, warming comfort food!

Oh? You were thinking of something lighter? A simple salad, maybe? Or some chilled sushi? Naah. Trust me on this: Go to Finn’s Southern Kitchen. Settle down in air-conditioned comfort, cool off, and then give the slow-braised pot roast ($14) a try. You won’t care whether it’s July or January once your taste buds an tummy start a happy hum of gustatory satisfaction.

More about that in just a moment, but first, let’s introduce Finn’s, if you haven’t had the pleasure of an introduction already.

Finn’s is the latest venture of Steve Clements, longtime owner at Avalon on Bardstown Road). It opened just before Derby in a beautifully re-made art deco building that originally served as offices for Louisville’s Fincastle Fabrics (hence the “Finn’s”), which made fine cotton fabrics from the output of the looming 1880s-era Louisville Cotton Mill buildings next door. That long brick structure along Goss Avenue had recently housed a huge, lovable antique mall, and is now reborn as Germantown Mill Lofts.

We’ve been by for both Sunday brunch and a weeknight dinner recently, and were thoroughly pleased with both.

The dinner menu features down-home Southern cookery at attractive prices, with a half-dozen mains from $12 (for a Hot Brown) to $15 (for brown-sugar salmon). The bar offers short but appealing cocktail and wine selections and a good mix of local and craft beers.

A side of collards was long-simmered with chunks of ham and a whiff of red-pepper heat. Good, but a heavy hand on the salt shaker detracted.

Brunch is served 10 a.m. to 3 p.m. Sundays. It’s a menu brunch, not a buffet, with starters from $4 (for cinnamon-sugar toast) to $11 (for seven deviled eggs; you may have smaller portions for $6 or $9). Eight main-course brunch items are $7 (for fancy oatmeal slow-cooked overnight) to $10 (for a loaded breakfast plate or “Finn’s Ultimate” breakfast sandwich).

We couldn’t resist said Ultimate Biscuit, which loaded on so many goodies that Mary wanted to rename it “Kitchen Sink Biscuit.” Stacked with thick, savory milk-sausage gravy, an excellent chunk of juicy, tender chicken breast fried in a crisp peppery crust, a slice of rather bland American cheese that we’d have been happy to forgo, and two crisp slices of excellent bacon that hit the spot. It looked great on the plate, but the biscuit was cakey and crumbly, a good thing in principle but not really suited for sandwich use. This fine sandwich calls for knife and fork. A side of cheese grits ($3) was good, too, long-cooked and deeply flavored.

Avocado toast ($11) looked spectacular on the plate, but it didn’t really inspire us. It was built on very good, thick-cut bread that I guessed from its sweet egg flavor might have been brioche, and plated attractively with thin-sliced radishes, halved cherry tomatoes and lots of sprouts. The bread was thinly spread with a puny ration of mashed avocado, and topped with a sunny-side-up egg that looked good but came out with the white a trifle undercooked, showing unappetizing clear fluid at the center. A point off on this dish, but the pot roast and other goodies made up for it.