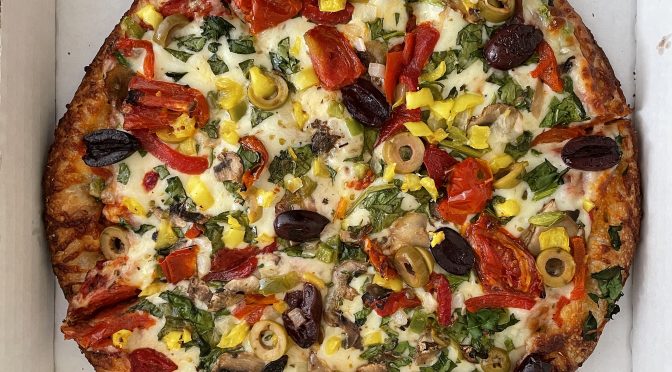 If you’d like to time-travel back to the ‘70s and taste pizza the way our parents and grandparents did, all you need to do is head for Impellizzeri’s.

Let me tell you why: Pizza impresario Benny Impellizzeri has been making pizza in Louisville since he started cooking at the fabled old Mario’s in Hikes Point in 1968, when LBJ was president and the Beatles’ White Album was high on the charts.

He opened his own pizzeria in his father’s Highlands butcher shop in 1978, turning out hot pies for long lines of eager supplicants in the evening after his father handled the meat business during the day. Save for a brief gap between locations back in the ‘00s, he’s been building his trademark hefty loaded pies ever since, accumulating a stack of “Best of” certificates on the wall.

No, Impellizzeri’s wasn’t the first pizzeria in town. The first in town showed up in the ‘50s in storied establishment like Mario’s, Joe Z’s, and on Bardstown Road, of course, Calandrino’s, Highland Italian, and Lentini’s.

But Benny went a step beyond. Not bound by Neapolitan or East Coast tradition, he reimagined pizza in a way that came to be called Louisville style. It built on a crust thicker than a New York pie, a sturdy base rendered necessary by the hefty pile of ingredients, sauce, and melty cheese and more of each piled on top. It wasn’t deep-dish Chicago style; its roots were clearly in the Italian tradition.

It became instantly popular, and it wasn’t long before Wick’s came along in the late 1980s and Clifton’s in 1990 to gain their own popularity with similar dinner-on-a-pizza variations. But Impellizzeri’s endures, and it has grown to four locations now, in the Highlands, Holiday Manor, Middletown, and one down in Elizabethtown. (A fifth, a downtown shop in the arena neighborhood, closed at the end of 2020, a victim of the pandemic.)

Inspired by a pizza craving and a tough of nostalgia the other day, we headed over to Impellizzeri’s Holiday Manor branch for a pizza, a pasta, and a salad. Pizza, of course, makes a great takeout option: It stays hot, tastes good warm or cold as well, and reheats nicely in the toaster oven.

Impellizzeri’s menu isn’t just about pizza, of course, although I for one can’t go in there without getting at least one. You can get started with about nine appetizers and five salads. Apps range in price from $6.99 (for a five-piece order of wings, jumbo or boneless) to $12.99 (for a dozen wings). Baked meatballs are $9.99; you can upgrade to grass-fed beef meatballs for $10.99). A side salad is $3.99, and a caesar for four is $12.99. Classic antipasto built on a salad is $8.99.

Four kinds of sub sandwiches served hot on a toasted hoagie bun are all $9.99, and nine pasta dishes are $7.99 (for spaghetti or penne with Mama’s marinara sauce) to $12.99 (for Mama’s lasagna with meat sauce).

Six of the pizzas are billed as Benny’s Originals and come in four sizes, priced from $14.99 (for a 10-inch four cheese, veggie, or chicken bacon ranch pie) to $34.99 (for a 16-inch sampler piled high with three meats and five veggies and takes 30 to 45 minutes to prepare).

Four thin-crust pizzas come in two sizes and cost $14.99 for a 14-inch pizza and $18.99 for a 16-inch pie. If none of that satisfies you, you’re welcome to build your own with four sizes, four crust options, three cheeses, and about two dozen toppings, which can cost anywhere from $9.99 for a 10-inch cheese pizza to, well, a second mortgage.

A 10-inch veggie pizza ($14.99, pictured at the top of the page), one of Bennie’s originals, was excellent. It was well imagined and carefully executed, with nine veggies – mushrooms, onions, roasted red peppers, green peppers, banana peppers, oven-roasted tomatoes, baby spinach, kalamata and green olives. The veggies worked and played nicely together in texture and flavor. They were piled almost all the way to the edge of its half-inch crust, atop appropriately scanty, tangy tomato sauce and appropriately generous stretchy mozzarella.

Spaghetti with Mama’s homemade marinara sauce ($7.99) was good too, perhaps lacking the excitement of the pie but pleasant in its home-style simplicity. A large portion of al dente spaghetti retained its proper texture in its foil pan all the way home. An equally generous portion of bright-red sauce seemed to have been made the old-fashioned way, thick and long-simmered to the point of sweetness. A few shreds of grated Parmesan almost seemed an afterthought.

A pair of oversize breadsticks swimming in delicious garlicky butter come with pasta dishes, and they are impressive, especially when crisped up in the toaster oven.

A caesar salad ($6.99) impressed us. Neat squares of crisp, fresh, and cold romaine were coated with a creamy, gently tangy dressing and crowned with excellent large garlicky croutons.

Noise Level: The room was almost empty and completely silent for a late Saturday lunch.