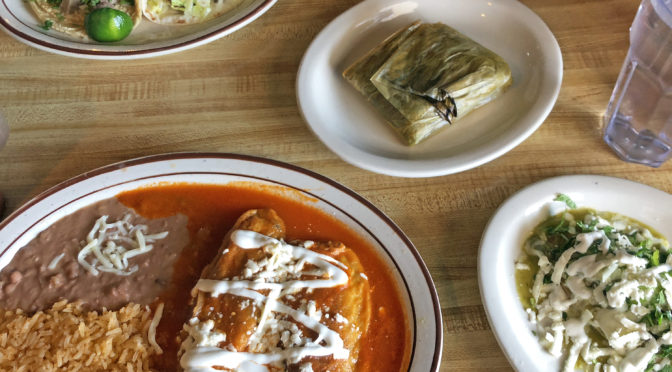 Can a dining decision be political? You bet! When nightly news shows horrifying images of immigrant parents ripped from their families while partisans shout for a border wall, it’s time to call B.S. The best way I know to do that is to take my dining business to local restaurants run by Latino neighbors, such as the spectacularly good La Lupita in Clarksville.

And while I’m there, happily noshing, I want to thank the owners and servers and tell them I’m glad they’re here: “Me gusta que tu eres mi vecina,” I’ll say in fractured Spanglish, reaching out with a few words in their language. “I’m happy that you are my neighbor.”

It’s easy to find good Mexican eateries around town nowadays, as they’ve proliferated in recent years. Just about every neighborhood has a few, but many of the real Spanish-speaking taquerias are concentrated in the South End, along Preston Highway, and across the Ohio in Clarksville.

We took a quick run across the bridges the other day and were amply rewarded by my first visit to La Lupita. The first won’t be the last. Based on an exceptional meal and stellar service, I’m naming this lovable little eatery No. 1 in the local taqueria sweepstakes. What’s more, it’s the only local taqueria I know of that specializes in the regional cuisine of Oaxaca (“Wa-hah-ca”) in far southern Mexico.

The restaurant is bigger inside than it looks, with two fairly large bright rooms loaded with exuberant, colorful Mexican decor.

The colorful four-page menu offers more than 60 dishes, many under $10, topping out with meat and seafood dinners between $11.99 and $14.99. Be sure to look for the Oaxacan specialities scattered among the more familiar Mexican dishes. They’re worth seeking out.

After inhaling crisp chips and delicious house-made salsa, we loaded the table with both Oaxacan specialties – Tlacoyos ($3.25) and an Oaxacan chicken tamale ($2.75) – and more familiar Mexican goodies – a fantastic chiles relleños ($9.99) and a pair of tacos, one Mexican-style ($2.75) and one norteameriano ($3). It was all so good that I ate it all, failing in my usual abstemious practice of bringing some home in a box for lunch another day.

The tamale was amazing. Oaxacan tamales aren’t cylindrical but flat and rectangular, wrapped not in corn husks but big, green banana leaves that have been rubbed with oil to soften. Within was a thin layer of reddish-brown masa, colored and flavored with chile peppers, surrounding a big mound of shredded chicken mixed with an intensely savory dark mole sauce. The flavor was subtle and complex, spicy but not fiery, absolutely delicious.

Subtle complexity defines the tlacoyo too. You could call it a cousin to a  burrito: A thick, tender Oaxaca-style corn tortilla was folded over a thin layer of mashed black beans infused with light spices, then topped with a mound of julienned nopales that were al dente in texture, fresh and slightly vegetal in flavor like a poblano pepper without heat. It was topped with abundant aromatic cilantro, painted with tangy crema and sprinkled with earthy, crumbled Oaxaca cheese.

The chiles rellenos may have been the best I ever had. Two large, moderately hot, dark green whole poblano peppers were stuffed with mild cheese, coated in a light, eggy whipped batter and gently pan-fried, then plated with a generous portion of a piquant, sweet-hot red-chile sauce that I could have eaten with a spoon. Mexican-style rice was fluffy and light; refried beans were creamy and rich.

Both tacos were generously filled with fresh, flavorful meat. Carne asada was grilled bits of beef, served “American style,” which does not mean hardshell a la Taco Bell but a small, soft white-flour tortilla, fluffy and flaky, dressed with lettuce and tomato. Lengua (beef tongue) was perfect, pure and deep beefy flavor and firm texture. Served Mexican-style, it came on a pair of tender, fresh corn tortillas and was dressed abundantly with fresh cilantro and a bit of onion.

With a Jarritos tamarindo Mexican soft drink and a creamy flan ($2.50) for dessert, the best taqueria meal we’ve had in a long while came to a fair $28.33, plus $8 tip. The owner complimented me on my Spanish. I think she was just being nice, but I’ll take it.

Accessibility: Entrance and restrooms are level and appear accessible to wheelchair users. There’s a high curb in front of the entrance, so it’s best to park near the east end of the building, near the curb ramp.