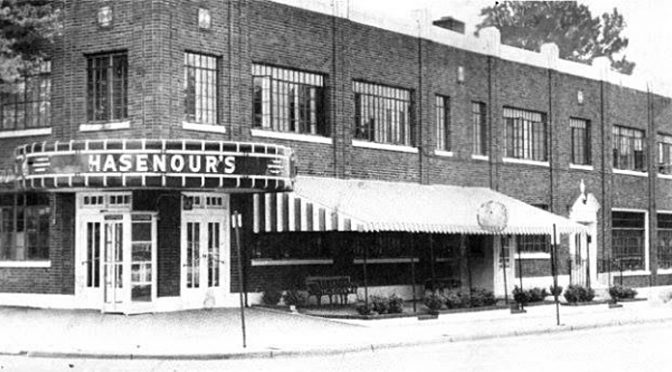 If you have lived in Louisville for more than a year or so, you’re surely mourning at least one favorite restaurant that isn’t with us any more.

A lot of us are mourning dozens! The restaurant business is a rough road, and success is far from guaranteed in a business with very narrow margins for profit. A 2005 study by Ohio State University concluded that 60 percent of new restaurants didn’t make it past the first year, and 80 percent go under within five years. It’s not a venture for the weak.

What’s more, even some dining rooms that make it through those difficult early years and go on to what looks like success still eventually falter.

What happens? The owners grow old and want to retire. Hard economic times bring down restaurants that had thrived in a better economy; we can blame Covid for a squadron of losses. Or the tax man comes calling and the owner can’t answer.

Taken by a wave of nostalgia the other day, I randomly posted a challenge on several social-media platforms: “Tell us about your favorite restaurant that’s no longer around, and why it was so special.”

The response surprised even me. I got back about 328 nominations. After I consolidated duplicates, I ended up with 140 gone-but-not-forgotten restaurants.

Let’s take a closer look at the top five. Then I’ll give you a peek at the entire list.

Most fondly remembered by our groups was Deitrich’s, which enjoyed a run of about 15 years in Crescent Hill before it closed in 2002. It took top spot with 14 mentions.Making beautiful use of the space, originally a turn-of-the-20th-century Masonic lodge, that long housed the Crescent Theater, Restaurateur Bim Deitrich revived it, first as Deitrich’s in the Crescent and later Deitrich’s Brasserie. With its spacious dining room sloping down the old theater aisles to an open kitchen on the stage, it offered international bistro/brasserie fare with stylish service and the personal touch that made Bim Deitrich a father figure on the local restaurant scene for 40 years.

Hasenour’s, pictured at the top of the page, came in a close second with 13 mentions. Popular with several generations of Louisvillians since the 1930s, it came to an end as the Baby Boom was growing up, finally falling to the tax man’s axe in 1996. Even at the end, it remained a salute to the fine-dining standards of the ‘50s and ‘60s, a reliable place for steaks and chops, lobster tails and, of course, powerful cocktails.

Palermo Viejo, one of the spots that could have earned my own top vote, won 12 mentions. Louisville’s only Argentine restaurant, it was a favorite since it opened on Bardstown Road in 2001 until it closed just after Valentine’s Day 2015. “My family has sacrificed so that I can live my dream,” the owner and chef Francisco Elbl wrote in a farewell message. “I have come to a point where I feel they have sacrificed enough.” No more steaks a la parrilada with chimichurri. I still miss that place.

I’m sure no one will be surprised to know that Casa Grisanti made the top five with 10 mentions. When Vincenzo Gabriele came to town and converted it from a family Italian eatery into Louisville’s first high-end “Northern” Italian dining room. Bringing in white tablecloths, attentive service, and gasp-worthy pricing for its time, he gained a host of followers and made the restaurant an icon. By the time it closed in 1991, it had served as training ground and mentor for dozens of Louisville chefs and owners who’ve moved on to their own places, and that may be its greatest achievement.

Fifth place might surprise you unless you’ve been around for a while: Lentini’s garnered seven mentions, tying with the short-lived but lovable Timothy’s on East Broadway. Don’t think about Lentini’s declining years but consider its history: This place, along with its Bardstown Road neighbors Calandrino’s and its predecessor Highland Italian, introduced the Baby Boom to pizza, and Lentini’s did it in the context of a fine sit-down restaurant.

Ah, memories. I’m sure you’ll find plenty more of your own on the rest of this list. If we left off one of your favorites, let us know!

The Old House restaurant really was located in an old, 19th century house on Fifth Street downtown. It was the city’s finest upscale French dining room for many years. (Filson Club photo.)