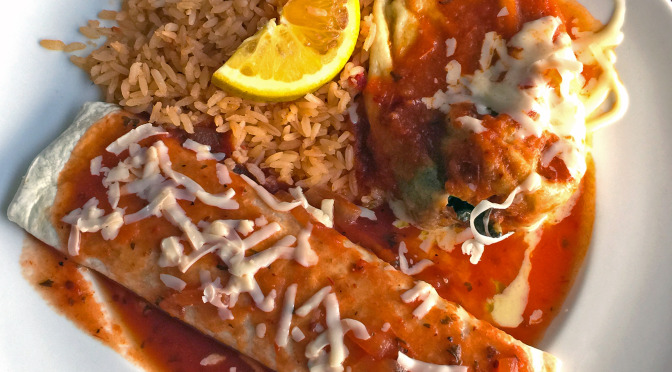 I like Mexican food, and I like languages, and I’ve still got a lot to learn about both things. But there’s always room for more learning, both in the food department and the linguistic department. Like most Americans — er, Norteamericanos, that is — my language skills are weak.

“Eureka,” I said, an exclamation that works in English, Spanish and Greek. “Why don’t I go eat at some Mexican restaurants? I can practice my Spanish on the servers!”

So we hit the road indeed, and over a week of good eats, caught up with a trio of estimable Latino eateries around the edges of the metro: Israel’s Delicias de Mexico in New Albany, Mango’s Mexican Resturant out between Jeffersontown and Fern Creek, and Gustavo’s Mexican Grill in Crestwood.

Delicias de Mexico brings owner-chef Israel Landon full circle as he returns to the venue that housed his original La Rosita. Several succeeding locations on both sides of the Ohio ended up on rocky shoals, but now he’s trying again, and we’re glad to see him back.

The small but confortable room sports a bright and sunny Mexican vibe, and service was courteous, prompt and quite willing to listen to my awkward efforts at Spanish without giving me any side-eye.

The menu is extensive, with only a handful of items — mostly seafood and top-end dinner items — that go over $15.

Things that made us happy: Best tortilla chips ever! Crisp, fresh, clean, remarkably fat-free. Ours came with an applause-worthy order of chunky, subtly flavored guacamole ($2); we didn’t realize until later that chips-and-salsa are not complimentary here but must be ordered ($2 with colorful salsitas). Both the Rosarito fish taco ($11) and a Pastel Azteca ($10), a savory “cake” of tortilla, beans, cheese, one-egg omelet and grilled veggies piled up on the plate like an Aztec pyramid, were well-prepared and flavorful.

Nitpicks: Landon’s cooking is fine, but a number of little things made us sad. Tilapia in the fish taco was musty and funky, not pleasant enough to finish. Tilapia in a seviche starter ($8) was okay, but the cilantro hadn’t been picked over, and some leaves were moldy. Veggies in the Azteca appeared to have come from a freezer bag. “Baby carrots?” “Por favor, no, Señor!”

Laid out bluntly like that, it looks bad, but these were really off notes in a pleasant song. We would gladly return. Pro tip: Sometimes you have to spend a little money to make a little money. Don’t cut corners if you can’t maintain quality. A good-size lunch for two came to $40.22 plus $8 tip, so they ought to be able to make the numbers work.

Gustavo’s occupies a large space, three rooms with a bar plus a large patio in a shopping center space between Crestwood and I-71. It is bright and cheerful inside, with bright and sunny walls the color of free-range egg yolks, big-screen TVs (showing Women’s World Cup soccer), happy Mexican music and friendly service.

The menu is very large and commendably affordable, with only a handful of dishes that top $10. You won’t find many regional dishes here — no Mayan goodies like those at Israel’s — but there’s just about every familiar Mexican item — from burritos, enchiladas, quesadillas and fajitas to taco salad and chile con carne.

Things that made us happy: Carne asada tacos ($9.99), tender spicy beef wrapped in soft tortillas with beans and rice; and an enchilada and chile relleno combo with rice ($7.49).

Nitpicks: Nothing was particularly spicy, and dishes smothered with cheese. I like cheese, but a thick blanket of bland queso and mild red sauce served to fill us up without any real payoff.

Mango’s is another shopping center eatery, just off Hurstbourne near Watterson Trail. It reminded me a bit of Gustavo’s: Bright, multiple rooms, one housing a bar; friendly Mexican servers who spoke English well; an affordable Mexican-style menu that tops out around $16, and the feel of a suburban sports bar with a Latino accent.

Nitpicks: There wasn’t a lot not to like, although an app order of Chihuahua cheese sticks ($6.99) didn’t budge our flavor meter off “boring,” bland cheese logs not quite melted in fried tortilla rolls.

Dinner for two, with a couple of Carta Blanca Mexican beers, came to a very reasonable $34.53 plus an $8 tip. •