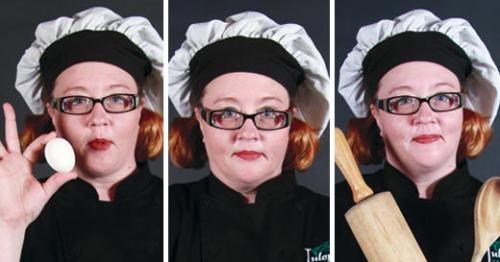 I recently stopped in on a Monday for breakfast at a diner near where I work. The place was busy, but not full. I wasn’t greeted, as I had been on each previous visit.

This restaurant features an open hot line, where I could see a solitary cook hard at it. A single server was flying around the main dining room at top speed. Several empty tables needed busing. I found a seat at a clean table in an empty side room, but wasn’t sure the server had seen me since she had her hands so full. I waited five minutes, then walked back into the main room to catch her eye, and asked if it was okay if I sat in there. It was.

The wait to get a beverage and put my order in was longer than normal. During the wait, two teenagers took another empty table nearby. They came in about 10 or 12 minutes after I sat down, but we ended up getting waited on simultaneously, and our food came out at the same time.

As she brought my iced tea, I asked her, “Are you all by yourself this morning?” She admitted she was. “The other server threw a fit and walked out. I said I could handle a Monday morning by myself, but I forgot today is a holiday, and it’s been non-stop.”

This was something that I, as a former restaurant worker, could understand. Mondays are usually fairly slow during retail hours – unless it’s a holiday, in which case folks who wouldn’t normally dine out on a weekday seem to show up in droves. She was doing her very best, and I watched her with admiration as she dug herself out of the weeds, bringing meals to patrons and busing dirty tables until she regained control of the room.

She did all of this with a smile, and without a trace of bitterness. Also, kudos are due to the line cook – my food was perfectly executed and hot when served. I mean, it was just diner breakfast food, and plating didn’t involve tweezers or precise sworls of sauces, but given the situation it would have been forgivable had it been messy or cold. It wasn’t. I left a fat tip.

About a week later, a friend and former co-worker who is now a restaurant owner posted the following on Facebook:

“70 top walk in, thank you whoever you were! And to staff for rocking it out!”

Yes. Seventy unexpected, un-staffed-for, patrons. For me and other former and current restaurant staff, reading this is like watching someone drive over a cliff when you don’t know how long the drop is on the other side. My heart was in my throat.

My first worry was for the perimeter sentry. “Did the host faint before they had to come tell you?” I asked, meaning “before they had to inform the kitchen.” While line cooks aren’t identical in temperament, as a group they are generally known to be profane and demonstrative. I could easily imagine the wailing and gnashing of teeth that would occur in most of the kitchens I’ve worked in. Sometimes hosts and servers get the brunt of line cook outrage when presented with bad news.

It turns out it was a spontaneous wedding reception after-party. The wedding guests had become disenchanted with the level of service they were receiving from the bar at the event venue, piled into their cars and agreed to meet at my friend’s establishment.

Peppered with this and many other breathless horrified questions about his staff’s reaction, my friend answered simply: “Nah, they got ready and handled it, bar is set up for volume and they flow best under pressure.”

I’m happy for him as an owner, both that he had a good spike in income for the day and that his staff performed ably, averting an almost guaranteed service disaster. This crew deserves medals. It might have gotten ugly in the kitchen or the server’s station, but from the guests’ perspective they acquitted themselves well under extreme duress.

However: those guests were extremely fortunate. It’s never a good idea to drop a large party into an unsuspecting restaurant without warning. Always, always, always give a heads-up phone call – even if it’s five minutes before you arrive. If nothing else, that five minutes will give the staff a chance to ready themselves for battle.