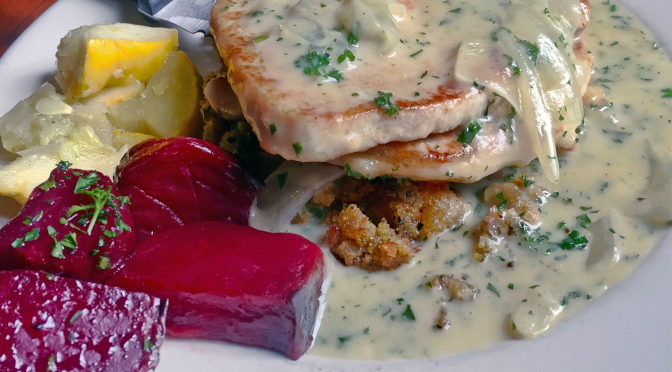 Kentucky’s beautiful Shakertown at Pleasant Hill is one of my favorite places anywhere. Nestled in the shady lanes and meadows of a Mercer County hilltop, this 200-year-old restored Shaker village is both a living museum and a peaceful and serene getaway.

And, completing the lure, it also boasts an excellent dining room, with first-rate upscale bistro fare served by black-clad servers in the elegant beauty of the Shaker Trustees’ House, a redbrick hostelry that dates back to the early 1800s.

Well, that’s the sad news, or sad at least for those of us who’ve grown up with Shakertown and know it as a living museum showcasing the Shakers, the millennial sect that purportedly believed in hard work, beautifully simple design, and no sex whatsoever. because they believed the end of the world was coming too soon to bother.

Believe me, the beauty and quiet grace of the sturdy old Shaker buildings remains. We spent a relaxing overnighter there recently, and you can surely still feel the shades of the old Shakers wandering around, climbing a creaky staircase or peering into a shadowy barn.

But a few years ago, with the arrival of new management and a subtly different name – from Shakertown to Shaker Village – things began to change.

“Shakertown … is dying,” University of Kentucky Political Science Prof. Ernest J. Yanarella wrote in 2004 in the Terrain.org environmental journal. “A steady drop in attendance, compounded by the sameness and lack of vibrancy of its presentation of the former Shaker community, hints at deeper troubles.”

Faced with declining attendance and revenue, Shakertown was starting to look a little shopworn when Maynard Crossland came on as the non-profit educational corporation’s President and CEO in September 2011. He was charged, according to its 2015 annual report, to come up with a plan to “enliven the guest experience … as a tourism destination for a 21st century audience.”

I’m sure that yanking a 20th century replica of a 19th century millennial sect into the 21st century wasn’t easy to do without breaking anything, and I’ll give them credit for keeping the spirit alive.

Shakertown – now billed as “Shaker Village” – has done a lot of needed paint-up and fix-up. You’ll no longer find senior citizen volunteers in Shaker attire making brooms and rolling pills and such in replica shops. You can still get your Shaker history and culture here, but it’s best to check the website or follow Shaker Village on social media to match your visit to its dozens of scheduled programs.(This weekend, for example, you can meet the village’s horses Friday and Saturday.)

The dining room is now called “The Trustees’ Table” and, thanks to a historic vote by Mercer County’s citizens to go “wet” a few years ago, now offers wine. beer and bourbon, with a good selection of Kentucky’s native spirit from $8 to $16 per glass.

A half-dozen starters, soups and salads are $2.95 (for a cup of soup) to $9.95 (for a large Kentucky wilted salad). Eight dinner entrees showcase country-style flavors with modern touches, ranging in price from $18.95 (for pan-fried catfish fried golden in a cornmeal breading) to $22.95 (for brisket slow-smoked over hardwood cut on the village property).

Tomato-celery soup ($2.95 for a cup, $4.95 for a bowl) was another holdover from the old menu, a rather thin soup with bits of celery and a pool of melted butter on top.

Fried green tomatoes ($7.95), clad in a crisp, tempura-style breading, were good, although I’d have preferred thinner slices cooked all the way through. They came with Tabasco-laced ranch and a very sweet “Sue’s sweet pepper jelly.”

If you don’t think ratatouille is a Southern dish, you just haven’t tried it over Weisenberger Mill grits with Kenny’s Kentucky white cheddar. The meatless offering of the day ($17.95) it spoke of Provence with its herb-scented, gently sauteed diced tomatoes, onions, and eggplant.

With cold, strong, freshly brewed iced tea, dinner for two came to $62.68, plus a $15 tip for our pleasant, black-clad server.