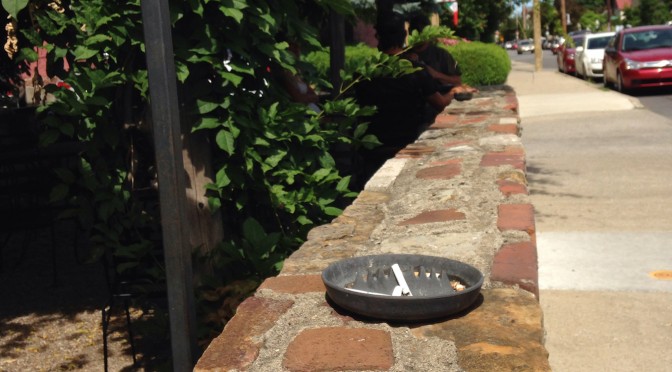 Sometimes it is good to be wrong.

Consider, for example, this prophecy I uttered in 2010: “Since the passage of Louisville’s no-smoking law for restaurants and bars, the patios have become the de facto smoking section. If this doesn’t bother you, great! But to be blunt, it makes most patios no-go zones for me.”

That forecast made sense at the time, a couple years after the city banned all smoking indoors at restaurants and bars. Initially, the ban inspired glum forecasts that the exodus of smokers would drive most eateries and watering holes out of business, turning Louisville into a dismal purgatory akin to, say, the main drag in Booneville, Ky.

Happily, that scenario didn’t play out. Neither the smoking ban nor the Great Recession did much to slow down our booming restaurant scene.

But my prediction seemed more reasonable: Rather than giving up dining out entirely, surely smokers would simply head outdoors to light up.

Initially, that seemed to be the case. Grumpily, I would stride past patio areas with eyes and nose averted, choosing the purified environment within. But something funny happened while I wasn’t paying attention. More and more, especially in the “fine dining” sector, management began choosing to declare their al fresco areas smoke-free, even without the pressure of a law.

This certainly isn’t 100 percent true. Walk along Frankfort Avenue and you’ll notice clouds of smoke drifting across the sidewalk from Vint, for instance, where loaded ashtrays line the low stone wall separating the coffee shop’s patio from the sidewalk. And the vast, wildly popular ziggurat of decks at Captain’s Quarters is 100 percent smoke-enabled.

In trendy NuLu, though, smokers may have to look around to find a place to light up. On a recent stroll through the neighborhood, my friend Laura Wallace, owner of City Concierge Louisville, found plenty of smoke-free al fresco spaces, along with a few smoker-friendly alternatives.

Taco Punk, Ghyslain and Harvest all appear to welcome outdoor smokers, she reported, while La Coop, Decca, Rye and Mayan Café were generally smoke free, at most providing small smoking areas well away from the dining tables.

Chef Anthony Lamas of Seviche says he decided to make his Bardstown Road landmark’s extensive al fresco section fully non-smoking because he feels secondhand smoke diminishes diners’ enjoyment. “I think it’s important to be smoke free whether it’s outside or inside,” he says. “It does change the experience of dining.”

“We certainly don’t want smokers to feel unwelcome, and we are happy to provide an oasis where they can smoke,” adds Seviche’s front-of-house manager Madeline Doolittle. “Just not near where people are eating. Our guests are very pleased that we have a smoke-free environment, therefore so are we.”

At Napa River Grill in Westport Village, the only smoke emanates from the patio’s fire pit, general manager Ned Anderson says. The restaurant’s indoor-and-out no-smoking policy has been in place since long before the Metro law, going back to the restaurant’s previous location on DuPont Circle. “You should really be able to smell and enjoy all the sensory elements that go into a great meal, which become harder to distinguish in a room with guests smoking,” Anderson says. “After all, the eyes and the nose get to ‘eat’ first.”

Asiatique on Bardstown Road also maintains a smoke-free policy indoors and out, Chef Peng Looi says. But they make an exception for the restaurant’s occasional “ABC dinners,” when paying customers take over the entire patio to enjoy an al fresco program of Asian-inspired cuisine, bourbon pairings and, wait for it, cigars. Light ’em if you got ’em! But put ’em out before the dining public returns the next day.

Dean Corbett’s restaurants, Equus & Jack’s Lounge and Corbett’s – an American Place, are smoke-free indoors and out as well, says Elizabeth Stites, director of operations at Equus/Jack’s. They went smoke free a year before the smoking ban, she explains, because a chorus of customer complaints about smoke couldn’t be resolved with separate sections and filtering equipment.

The decision to keep the al fresco area smoke free followed naturally. “At the time, many restaurants were using their patios as smoking areas, which prevented non-smokers from enjoying the patios,” Stites says, confirming my 2010 hypothesis. “We thought it would be nice to offer non-smokers an outdoor option.” (Smokers may retreat to one separated outdoor table with an ashtray.)

So here’s my new prophecy for 2014: The tide has turned. Al fresco smoking will all but completely disappear as time goes by. Catch me in about four years, and let’s see how that worked out.