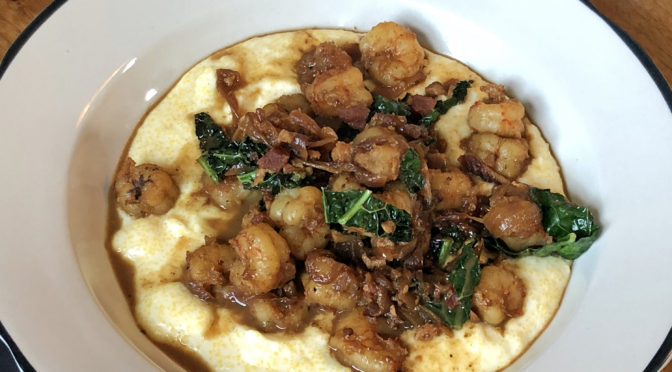 Who doesn’t miss pulling your chair up to a table at a favorite Louisville restaurant and ordering a dish that you love? I sure do!

Of course there’s always takeout, ideally with no-touch curbside delivery, as an alternative way to let the chef show her skills. But here’s another alternite: Why not try your hand at whipping up a restaurant dish at home? This option kills time as we sit in social isolation, and it makes dinner a lot more special than a burger or PB&J.

Shrimp and grits is a local favorite, and justly so. Originated as a simple, everyday dish in South Carolina’s coastal Low Country, it became a Louisville favorite after Chef Shawn Ward introduced it at Jack Fry’s during the 1990s. It became an instant hit, and before long, just about every with-it bistro added a version, no two quite alike but each bearing its chef’s own personal stamp (like the shrimp-and-polenta from Portage House, pictured above).

Want to make your own? Summon Kroger Pickup (formerly ClickList) and summon any ingredients you need. Or come up with your own variation if you have shrimp on hand and a box of grits. (I love Weisenberger Mill, usually available at Lotsa Pasta, but go with what you’ve got.)

Here’s a recipe I fashioned for my old Wine Advisor FoodLetter back in the autumn of 2004. I eat a lot less bacon than I did back then, and shrimp too, for that matter. But this dish still sounds mighty good.

If you try it, or a variation, drop by the HotBytes Forum and tell us how it went.